In the first scene of Oleg and Vladimir Presnyakov’s one-act play Terrorism, one character asks ‘What sort of world do we live in? You’re not safe anywhere now.’ Aaron Rozanski and Sophie Cullis deliver a production that proves just that, creating a disquieting atmosphere where anything is possible at any moment onstage, culminating in a harrowing, intense ending wherein no character seems wholly innocent of some act of terrorism.

The atmosphere is established the moment you set foot in the Durham Union Debating Chamber and are presented with a raised stage adorned with litter, empty bottles of vodka and other detritus, from a park bench to a clothes dryer and an 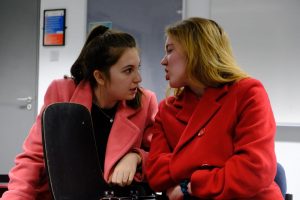 ironing board. The transformation of this civilised and historical venue into something gritty and chaotic feeds into the play itself, in which the most unsuspecting characters like an elderly lady or an articulate lover prove themselves to be ruthless and cold-blooded. Unsettling music and sound effects while audience members took their seats added to this tone. Indeed, credit should go to Emma Stevens as Tech Director; apart from a few mishaps with the house lights, the lighting allowed us to focus on particular characters’ speech or thoughts at specific moments.

The cast themselves offered stellar performances, with the fragmented nature of the show – it is structured as six supposedly unconnected scenes – allowing them to function as a kind of troupe, all playing at least two different characters. Hatty Tagart showed immense range as a cruel old woman and an insecure working mother, as did Thomas Bracewell, first as a blubbing office worker then a no-nonsense Chief of Police. A striking aspect of the script’s characterisation is that no individual is morally clear-cut; each scene delivers constant revelations and can change radically in a moment. Jack De Deney in particular transformed what seemed like a scene of erotic play into something akin to sexual assault, delivering a complex and articulate character in only a few pages of dialogue, such that the audience struggled to know where to lay our sympathies. Eleanor Storey’s performance gave us a chilling contrast between her initial portrayal of a rape victim, and later as a sadistic police officer investigating the very same case. Helena Baker and Keir Mulcahey made for a brilliantly disturbing double act, speaking as one and bouncing off each other with an air of absurdism that left the audience uncomfortable but compelled. Tom Murray’s performance offered the play’s ultimate, chilling resolution, as well as its final 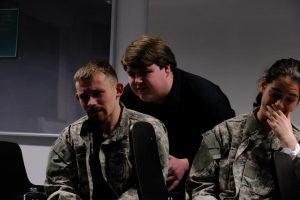 throes; it was truly harrowing for the audience to watch Murray suffer and writhe onstage as the lights went down.

Set in a single act a little over an hour in length, Terrorism does not stop for a moment and the cast and crew have clearly worked to deliver a tight, clockwork production that plunges into each new scene, leaving no residue of the previous one, with enthusiasm and careful timing. The directorial decision to mark each new character with minimalist costumes and a change of accent or movement is no doubt borne partly out of practicality, but also allows the actors’ abilities to shine through and reminds us that none of the characters are that different to one another – they have all done something wrong.

The scenes are all heightened, deliberate and acutely stylized; while this shows careful craftsmanship on all fronts, at times of high energy, the production risks dwelling beyond absurdism and losing control a little. In one scene, a character shouts at the top of his lungs for several lines, and it is easy to lose track of meaning when the audience is so overwhelmed with the intensity of the performance. That said, it is highly successful in suspending disbelief, a great feat given that this is a production which does not shy away from taboo subjects, from suicide to rape to bodily fluids to homicide; I found myself believing that someone really had hanged themselves in the next room.

It’s certainly a production that demands some focus from its audience; perhaps it is the nature of a translated work, but every line really does matter and it’s easy to miss what actually connects the six scenes together into a coherent storyline. It was not abundantly clear how some scenes were tied to others, but this did not detract from the final resolution.

Terrorism is not an easy watch, either in its subject matter or the level of concentration required to appreciate it. It is, however, a powerful piece of theatre which you will find yourself running in your mind over and over again; Rozanski and Cullis’s production deliberately offers more questions about society than it does answers, and delivers an expertly-performed, if at times absurd, demonstration of resourceful storytelling and black humour.

Terrorism will be playing in the Durham Union Debating Chamber at 3:30pm and 7:30pm on Sunday 10th March.