Review: TDTC Musicals through the ages 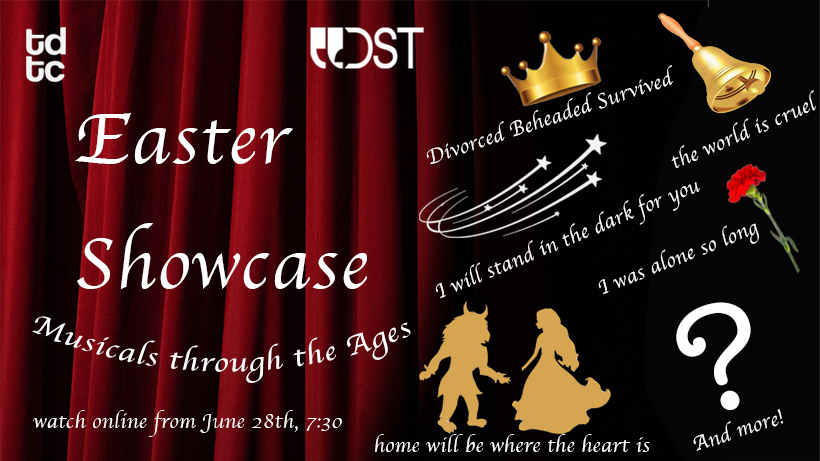 Tone Deaf Theatre Company’s showcase takes us on a chronological tour of musicals through the ages, ranging from the 1600s BCE with Joseph and the Amazing Technicolour Dreamcoat to the dystopian future settings of Urinetown and Venice. Accompanied by some fantastic vocal performances from all involved, it was a perfect pairing for any theatre obsessed history or classics student.

TDTC must be commended for the accessibility of their showcase, being available to watch for a whole week, allowing pandemic theatre to be enjoyed by all. In general, this piece of online theatre, however, did not escape a few technical difficulties which have plagued online theatre this year. Furthermore, although I immensely enjoyed the theme of the showcase, I was struck by the glaring omission of songs from musicals I deemed to be key pieces of musical historicity, namely Les Misérables, Hamilton, and even Miss Saigon. However, this is not to say that I didn’t enjoy the performance of less mainstream musicals – with Oscar Scott and Jennifer Leigh’s performance of the duet ‘Unworthy of Your Love’ from Assassins encouraging me to take interest in this otherwise unbeknownst-to-me show.

All musical numbers excelled, and all performers should be celebrated for their undoubtable vocal talent, however three performances stood out to me as exemplary. Flo Lunnon’s exceptional performance as Trina in ‘I’m Breaking Down’ from Falsettos was a climax of the showcase. Her dedication to acting out the scene, by performing with full props in the correct setting of a kitchen, was authentic, raw, and truly captivating. Her commitment to a quite literal ‘flour crown’ on her head was refreshingly funny in a show otherwise lacking in humorous numbers. In terms of her singing, Lunnon has a voice worthy of equal commendation. She is a true principal actress, and one can tell she is imbued with not only sheer talent but experience.

Secondly, as the only group performance of the entire show, ‘Ex-Wives’ from Six was truly enjoyable to behold. Despite my ingrained bias against the historical inaccuracy of the musical, this group piece was genuinely exceptionally impressive. The harmonisation and timing of the piece was great, despite being filmed in six separate videos for each vocalist. It delivered true ‘girl boss’ energy, and the singers impressed as a cohesive group of individual yet powerful women. Erin Waks and Olivia Jones should be commended for their contributions to this song and the showcase as a whole. Yet it was Vivienne Shaw’s casting as Catherine of Aragon which made her the highlight of the piece; her sass as the scorned first wife filtered through the screen. In fact, Vivienne was the true star of the entire showcase. Although it teetered onto the verge of being an almost one-woman show in the first half, I can see why director Olivia Jones gave in to her pre-eminence. Shaw also shows fantastic talent and range, from Sally Bowles in the eponymous ‘Cabaret’ to Eurydice in ‘All I’ve Ever Known’ from Hadestown. Shaw imbued these historical retellings with her refreshingly classic yet modern sounding voice. Particularly arresting in terms of her personality and belting ability, her musical numbers show great flexibility and range. She is certainly one to watch.

Lastly, my favourite duet, ‘People will say we’re in love’ from Oklahoma! featuring Ollie Stockley as Curly McLain and Orlaith Chambers as Laurey Williams, shone for the compatibility of the pair. Well matched both acoustically and visually, their perfect early-twentieth century accents and their undoubtable through-the-screen chemistry transported us back to a time of proper old-fashioned romance. However, Stockley was not the only leading man of the showcase, as Oscar Scott carried the show from beginning to end as the only other male vocalist.

In general, I would have liked some or any attempt at costuming or makeup. A subtle nod to the characters would have gone a long way in adding to the professionalism of the showcase and character development. Moreover, the lack of variety in terms of song type and the repetitive order did lead to a lack of engagement inevitable of an hour and a half recording. However, the positives far outweigh the negatives when it comes to this showcase. The inclusion of two same-sex love songs, ‘If you Knew’ from Lizzie and ‘Just Breathe’ from The Prom, was entirely apt for a Pride month performance. It was also a fantastic insight into the talent of this theatre company’s cast and crew.

Overall, this showcase certainly succeeded in whetting my appetite for TDTC’s dramatic output in the next academic year!