Review: Table for One 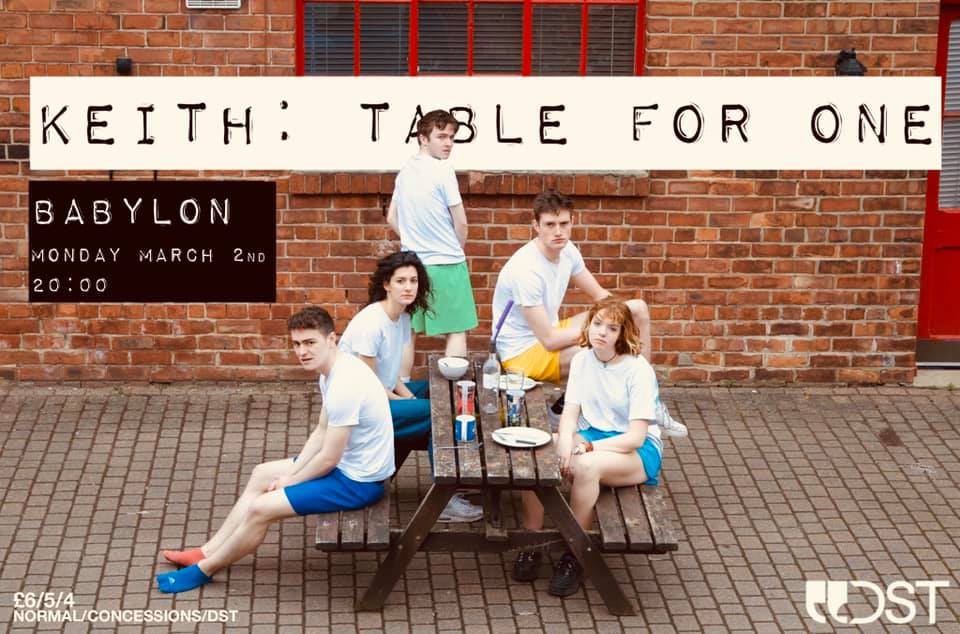 Alexander Cohen is thoroughly entertained by KEITH’s newest sketch show, the hilarious Table for One.

Would an all new, fast paced, balls to the wall, rollercoaster of a comedy show work in the heart of the seedy underbelly of Durham’s newest (and dodgiest) club?

The audience at KEITH’s Table For One, their one night only extravaganza sketch show, were quick to learn that it very much worked, with the venue bringing a late night Fringe-esque atmosphere where anything could happen. KEITH certainly lived up to that expectation bringing a myriad of bombastic sketches ranging from the absurd to the musical, and the deadpan to the dark. No sequence was too long and there was a perfect amount of variety to keep the audience engaged for the hour’s runtime.

The sketches that worked best had punchlines that nobody could predict and hit hard with KEITH’s much-loved brand of outrageous humour: the audience were pieces over the skit about Steven Hawking “not being him when he’s hungry” and another about avocados and magic spells, both of which delivered with the utmost dedicated and sincerity, were perfectly timed and rehearsed.

With that said, some sketches missed the mark: A rendition of We are the Champions where Freddie Mercury confesses that he has AIDS felt overly drawn out and a joke about a musical teacher’s “special instrument” felt too predictable from the outset to be truly hysterical. Despite the at times risqué content, no joke ever had cruel intentions, with each punchline well-developed so as to only poke fun at its content rather than be genuinely cruel.

New members Emily Oliver and Gayanah Vlieghe brought different styles to the table, with Vlieghe embodying a more highbrow droll persona contrasting with Oliver’s screwball physicality and absurdity. Both complimented the other performers and were never relegated to the side-line in sketches as is often the case with new troupe members. Oliver in particular shone when she performed a solo rendition of her “lonely necrophiliac” song, no mean feat in front of an audience of over 200 people.

With that said, each performer embodied a distinct style: Jack Firoozan’s relentless yet controlled energy allowed him to step in and out of characters with ease, Calum Maclean’s seriousness meant he could deliver punchlines with meticulous timing, and Mungo Russell’s Rik Mayall-esque aura of silliness, each performer had their moments in the limelight. Special mention must also go to Fergus Carver whose slick lighting design ensured the adrenaline was high and pace was maintained throughout.

KEITH’s new troupe has room to progress, but the talent on show last night means that Table for One, has real potential to become something truly hilarious.