On Friday November 23rd, Feather Theatre Company opened Tennessee Williams’s Sweet Bird of Youth, to great success. In typical Williams fashion, the play grapples with youth and innocence giving way to disillusion and cynicism, a theme which the company was able to handle with care and portray with impressive nuance and subtlety. With a strong cast who worked as a unit and noticeable effort having gone into the technical aspects of the show, Sweet Bird of Youth was an impressive showcase of talent all round.

The costuming, set, and lighting were all highly effective in creating the ambiance of the postwar Deep South. Decorative touches such as houseplants and makeup boxes made it clear that thought had gone into the desired aesthetic, and the end 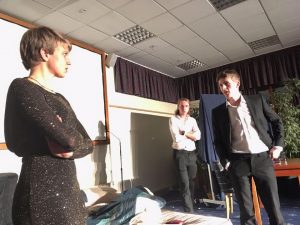 result was one that was polished and professional in appearance. Scene transitions were quick and made strong use of music so as not to interrupt the flow of the performance. Despite the limitations of a student budget, the costuming was well-thought out, clearly taking into consideration not just the era in which the play was set but the distinct personalities of Williams’s characters. Boss Thomas J. Finlay’s slicked back hair and cream suit created the image of a terrifying Southern patriarch; Heavenly’s white dress conveyed not just her father’s false illusion of her virginity, but her own vulnerability; Princess Kosmonopolis’ silks and shimmering ballgown lent her an image similar to that of a peacock showcasing its plumes, perfect for the nature of her character. Overall, it was clear that considerable thought had gone into the technical aspects of the show, and they were carried out in a way that allowed the audience to engage with the play as much as possible.

The cast gave strong performances all round, virtually all of them bringing the level of nuance needed to handle the complexity of characters typical to a Williams play. Impressively, just about everyone managed to carry off a convincing Mississippi accent, even during long monologues when slips could easily be forgiven. Sean Alcock gave a particularly strong performance as Tom Jr., the son of the town’s most prominent – and overtly racist and corrupt – politician, who spends the play threatening violence against protagonist Chance Wayne. His Tom was as full of Southern charm as he was desire for vengeance for his sister, often speaking affably to Chase in a way that induced more terror than a merely hot-tempered approach might have done. Williams’ plays often depend on the vulnerability and suffering of their women, and, though she 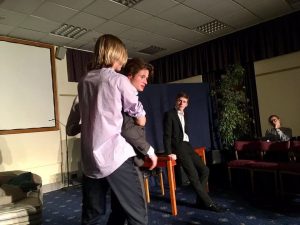 had only a handful of scenes despite being one of the most important characters in the play, none brought this signature vulnerability to life as well as Catherine Wright’s Heavenly. She managed to extract pity from the audience without becoming a pathetic, miserable figure, and earned our respects in her effort to deny her father and follow her heart, even when that defiance failed. Alana Mann’s Alexandra del Lago, or Princess Kosmonopolis, was a stunning demonstration of instability and insecurity; the energy which she brought to such a powerful role marked her as a standout throughout the night.

Most notably, the role of Chance Wayne was brought to life by Rory Gee, who was tackling an intimidating lead role but carried it off in a way that appeared effortless. His performance was polished and intelligent, his Chance being saturated with the particular gift for charm that marked him as a gigolo, yet at the same time clearly losing his confidence and self-assurance as he realises the truth of the goings-on in St. Cloud. He kept up a strong performance throughout the night, keeping the audience engaged and empathic.

The whole cast had noticeable chemistry with one another, operating well as a unit to produce what was an impressive production all round. The effort that had gone into this play marked it out as more than just your run-of-the-mill piece of student theatre, a commendable feat from a clearly talented cast and crew.

Sweet Bird of Youth will be playing in the Ustinov Room in Van Mildert College on Saturday 24th November at 7:30pm.