Sophie Wright survives an evening away from revision by getting stuck into some new student writing.

There isn’t much original student 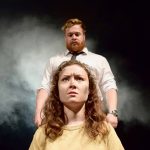 writing outside of DDF, and it is surprisingly refreshing knowing an audience is going to see something entirely created by students. Walking into The Assembly Rooms Theatre andimmediately struck by the visually stunning stage, Buttered Toast’s one-off performance of Survivor was an excellent idea, and the same can be said by the production itself—the concepts were interesting and creatively sound. However, its execution perhaps did not live up to expectation.

The script, written by Adam Simpson, was very well structured, and featured a great deal of inventive world building. A totalitarian government, systemically removing freedom and simple pleasures from the lives of its citizens, has instigated what is known as ‘the Trial’ (imagined capitalisation was evident). Students at ‘the Academy’ (again with evident capitalisation) are selected in an apparently random way, and are forced to undergo increasingly horrendous and callous tasks. If the prisoners refuse, they face death. The world in which the characters live in is revealed in fairly personal conversations—dystopian in a way that resembles 1984 or The Hunger Games. Sadly, there was not enough information revealed for the audience to fully become involved in the action. I understand the genre’s need to keep some information secret, and what was revealed was done at exactly the right times, but Simpson could have potentially shared more and still retained a sense of mystery. There are some fairly touching moments in the script, notably the conversation about the long-gone festivals of old. However, there are occasional clunky moments of dialogue; the revelation about Sam’s sister and the bears, for example, became a repetitive motif that was used in what felt like an unrealistic manner in what could conversely have been a real emphatic moment.

The staging, the set and the technical aspects of the show were perhaps some of its strongest aspects. 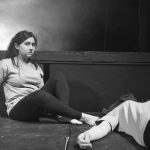 The dramatic lighting from the floor, the shadows created on the screen, and particularly the projected drawing onto the screen later, were inspired creative ideas, and executed fairly flawlessly. There were the occasional jarring moments of sound (some song choices perhaps did not suit the dystopian atmosphere), but they did inevitably add to the tension, even if the audience themselves were not immediately aware of its relevance. Simpson and his team, however, should commend themselves for an excellent job at branching out beyond standard DST lighting and sound.

The actors themselves provided some compelling performances. Charlie Keable as The Guard and Layla Chowdhury as the bitingly sarcastic Prisoner Two shared a solid rapport—one that carried the bulk of the play wonderfully. Their best moments came from the lighter moments of humour, which the audience visibly relaxed into. The monologues themselves were perhaps a bit dry, and the performances when under duress were possibly a tad repetitive and static, but nonetheless both did an excellent job. Sarah Macmillan as Prisoner One did, again, produce a good performance out of what appeared to be a difficult character. However, there were moments where it became difficult to fully believe her emotional reaction to her circumstances. Despite this, all three actors did a marvellous job, and should therefore be congratulated.

Survivor’s entertainment value was extremely high, and I had an enjoyable evening watching horrible things happen to people who didn’t necessarily deserve it. Buttered Toast should be proud of themselves for creating an atmospheric show and, if the opportunity arises, I would highly recommend sampling new student writing as an audience member. After all, if nothing else, it is something you will have never seen before.