REVIEW: Standing in the Rain 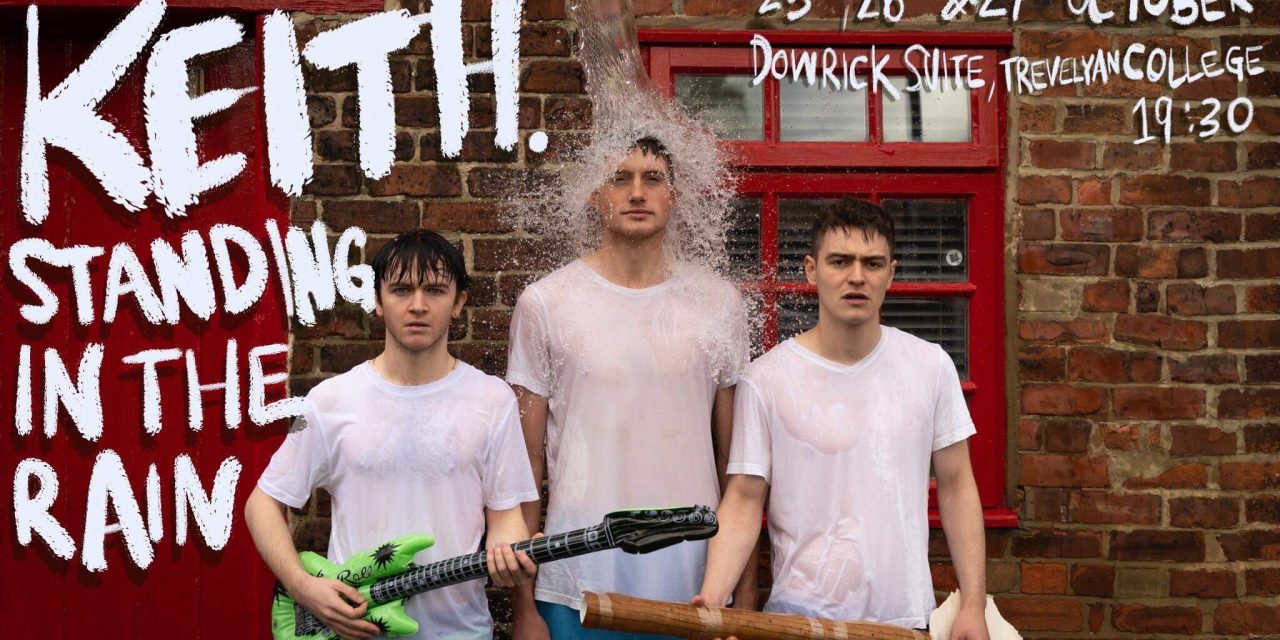 Watching my first ever sketch comedy show, it is safe to say that KEITH.’s Standing in The Rain set the bar up pretty high. This show was fast-paced and dynamic, encompassing a variety of scenarios that highlighted excellent performances and robust writing.  The title was extremely appropriate considering the rain I walked in to get to the Dowrick Suite in Trevelyan College.

Three strong performers offered an energetic hour that was filled with talent, humour and scenes inspired by movies, TV shows and prevalent societal issues. The sketches were separated by interstitial music cues that serve almost as commercial breaks, allowing the audience to take a break between each skit. This was a smart move given how sharply contrasting, and even at times jarring, each can be. The songs selected to act as sketch dividers fit the theme, or main idea of that particular sketch. It was a creative, fun element that not only augmented the comical ambience of the room, but also strung certain scenes together to tell one continuous story.

The team hadn’t been over-ambitious, using only chairs, and minimal props and just three performers (Mungo Russell, Calum Maclean and  and Jack Firoozan). This minimalistic aspect, coupled with a small stage, enhanced the intimacy of the sketch, providing a much better understanding of the story of each scene to the audience. As a result of this, any engagements with the audience seemed more natural. The emotions involved are much clearer in a small space, thus, the setting meant that I could see and hear everything clearly, which only boosted the audience’s perception of the show positively. Additionally, I found that another advantage of small stages is that there are is a much lesser chance of the show being hindered by its technical aspects, especially regarding microphones.

My favourite part of the show was definitely the song halfway through. The performers demonstrated an impressive vocal range, and the meaning of the song was conveyed effectively. The lyrics were dramatic, both thematically and sonically, and was delivered with great confidence, highlighting how comfortable the actors were depicting those roles. Complemented by a guitar, the song was satirical but excellent, and supplemented the audience’s understanding of the sketch.

Some sketches were based on the same storyline but performed disjointedly. This, however, did not necessarily jeopardize the coherence of the skit, but rather created a sense of greater familiarity and appreciation of the performance, as they were woven in seamlessly and flamboyantly at the right time. Some sketches felt longer than others, with the occasional hollow laugh from few audience members, but some memorable sketches include one of the actors lying to his friend about an accident, only to steal the PlayStation control, as well as a sketch involving ‘Deathbeds.’ Fans of Game of Thrones, Harry Potter, and even SpongeBob thoroughly enjoyed the references made.

The varying personas that the cast impersonated was extremely impressive. This was exhibited through the imitation of several accents, through voice modulation, and also varying facial expressions. The emotional investment into their characters demonstrated by their techniques, and by doing things truthfully under imaginary circumstances, the actors deserve all the credit for the overall witty and amusing effect achieved.

I had hoped there would have been a few female actors to add a different dimension and facet to the sketch comedy, since the show offered a predominantly open dissection of ‘lad culture’. However, the show and its creators, had much to offer through the brilliant work of pushing sensitive boundaries. The writing and performing was strong and permitted to speak for itself, which provided an upheaval of laughs with a distinctive flavour. The jokes come out of nowhere, are laugh-out-loud funny, and the whole hour is startlingly live. Standing in the Rain is a breath of fresh air, and indeed a Friday night delight.

Standing in the Rain will be playing at the Dowrick Suite, Trevelyan College, on 26th and 27th October at 7:30pm.