Jack Thorne’s Stacy explores the difficult and complex psyche of a perpetrator in the face of a heinous crime. With graphic, descriptive, language and the overwhelmingly hard subject of sexual assault, John Broadhead’s solo performance highlighted the frightening reality of the familiarity of the ‘perpetrator’.

Upon arrival, you were greeted with tea, biscuits and a disclaimer about potentially upsetting themes. Broadhead awaited you already on stage. Soon after audience members gathered their refreshments, a member of the production team who acted as almost a psychiatric aid to Rob talked to him and ‘coaxed’ him into speaking. The small interaction that then takes place, opens the door for Rob to initiate his speech that reminisces on his so-called remorse and guilt for the crimes and actions he has committed.

A flowing sense of what appears to be a re-telling of his stream of consciousness, Rob (Broadhead), recounts the day leading up to the event and the day after, as he explores the significant details of his childhood that he appears to blame for the development of who he has become. At points, it was uncomfortable. This wasn’t just felt through the triggering retelling of the incident, but with the soft nature and depth of personality that Broadhead gave the character, that often left you feeling guilty for sympathising with him. Director Alice Chambers chose to do the piece in a somewhat thrust stage, which enabled an 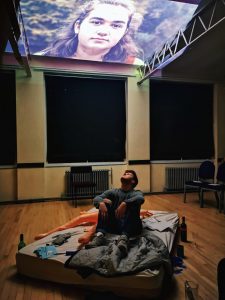 intimate setting that saw her direct Broadhead in towards the audience. At certain points, there were slight interactions as you saw him settle in amongst the audience whilst carrying on telling his tale.

One big focal point is the main feature point of the set. The unmade bed taking centre stage, is a direct comment on Tracy Emin’s ‘My Bed’. Like Emin’s piece, the bed is a piece of sexual objectification. The items, and memorabilia, scattered around, are reminders of the relationships formed throughout Rob’s life. Of the duration of the one hour piece Broadhead used this as his main traction point, plotting around it in order to visualise Stacy’s bed as he brought her persona alive. This complements the narrative which exposes the possible vulnerable aspects of Rob’s life. An example used is the death of his sister, however, the interesting perspective of this is that the memory is more tainted with how Rob’s egotistical and somewhat selfish persona dealt with it, rather than the tragedy of the event itself.

Stacy’s presence was prominent through Rob’s vocal narrative, the visualisation of her bed, and through the graphic and vocal aids. This introduced another point of interaction for Rob. The one-dimensional perspective of hearing ‘her’ voice, and seeing ‘her’ photo, really pulled the audience’s attention to Rob’s detailing of her. It is through Rob’s described interaction with her and his description of her that colourised Stacy.

The audio snippets were a snippet of Rob’s memories, and I thought they were particularly effective when it came to section, such as when Rob describes a childhood memory where his father attempts to put down a dog. The vivid nature of his words and story were really brought to life, not just through Broadhead’s poignant expressions, but through the intelligent use of sound. I found the visual graphics and the projections on the ceiling, provided by Tristan Ashley, were provoking and timed well. Although there was a few audio and visual delays, it rarely hindered the production, with Broadhead’s performance unwavering. Saying this, I did find that the repeated explicit pornographic imagery at one point was slightly unnecessary as I didn’t see the exact correlation to the piece- but perhaps this was just my personal perspective.

Overall I thought the production was well thought-out, and I commend both the production team, who did a stellar job fitting in all the visual and technical aids that enabled Broadhead to give his brilliant performance. The troubling themes were dealt with delicately, and would urge all those (who feel brave enough) to go and see it.

Stacy will be playing in Alington House on Saturday 1st December at 7:30pm.