DULOG’s Spring Awakening in Hild Bede’s Joachim Room was bold, brave and at times brilliant. The show handled tough issues and played upon the intimate nature of the setting, causing moments of discomfort from the audience, which were the intentions of the company, as described by Caroline Mosimann in her Director’s note.

While first night tech issues were consistently present, I would like to congratulate the company for not letting this deter their performances. It was because of this that I barely noticed technical hiccups after a while. It is of note that the technical team are relatively new to their roles, and for this I would like to commend them, especially for their work at short notice, however there are some tweaks to be made. Lighting was used effectively to colour the stage and reflect the tone of the piece, although I would have preferred to have seen more symmetry and cohesive lighting with the abstract blocking and characterisation. Similarly, sound would have benefitted from a slightly better balance, especially in the louder numbers. 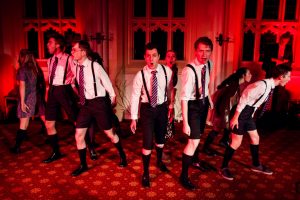 Mosimann’s blocking was creative and utilised the space, and from my position on the front row in the centre, I had the perfect view. I do feel as though audience members on the sides will have had an almost restricted view in smaller scenes due to the blocking, but larger ensemble scenes commanded the whole performance space and projected to all areas of the venue. Mosimann worked well with choreographer Megan O’Callaghan to create slick and stylised movement which carried into transitions which were incredibly smooth. O’Callaghan’s choreography heightened the performances and gave an incredibly intensity in the subtler numbers which I found to be incredibly effective. I felt that the production was at its strongest when the entire cast sang together, particularly in the final moments of the show. While the company boasts some impressive actors, it was this unity in singing which really had the biggest impact. The small yet powerful band also added to this, with eerie strings and rock inflections. For this Rhys Rodrigues and Honor Halford-Macleod should be praised for their work as musical directors, as the music was well blended and precise, while maintaining the rough and raw style of the piece.

The show was led by Rosie Dart and Sam Baumal as Wendla and Melchior. While the two took a little while to blossom fully into their roles, when they peaked, it was beautiful to watch. I would say that I believed their chemistry more in sung aspects than in the dialogue, but this is expected of musical theatre performers, especially seasoned DULOG cast members. Ensemble work was generally good, with enjoyable multi-rolling from Owen Kennedy, and touching emotion from Annabel Dickson. What I was most pleasantly surprised by was the raw talent emanating from the supporting cast, especially the boys! Although 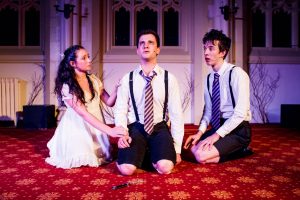 his part was (unfortunately) not the largest, Mark Woods shone as Hanschen, displaying comic timing and beautiful tenderness with his voice. His scene with Edward Bowman was one of my favourites, and marked a lighter moment in the plot. The standout performer for me, however, was Charlie Nicholson as Moritz. In his debut performance, he commanded the stage with confidence, and delivered a strong characterisation which matched his vocal prowess like that of an experienced actor. I look forward to seeing what else Nicholson will take on!

The only real criticism I have with the show is a slight lack of consistent cohesion within the production. At times different elements of the production seemed a little out of sync with each other for brief moments, before regaining them again. This was most noticeable between lighting and blocking, where balanced and subtle mood changes on stage were swamped by intense lighting. Similarly, there were times when aspects of blocking seemed a little stilted when transitioning from scene to song. However, these were very minimal points, and didn’t detract from the overall production, and I would place some of these things down to first night nerves.

Overall, DULOG have started this academic year with a cohort of both new recruits and familiar faces, and provided an intense yet hopeful portrayal of Frank Wedekind’s play. I would like to wish all involved the best of luck for the remainder of their run – you can catch Spring Awakening in action until Saturday evening!