Imogen Usherwood is drawn in by Darius K Thompson’s performance in Lion Theatre Company’s ‘Something Dark’.

“At least if I did have that pain, I’d know that I’m alive.” What does it mean to belong? To be accepted? To understand who you are yet feel like your identity is never truly your own? Lemn Sissay’s Something Darkforces us to consider these questions against the autobiographical backdrop of a person of colour in the UK, and LTC’s production – the first ever performed since Sissay’s own original run – gives this play the thoughtful, passionate treatment it deserves.

Set within a dark corner of the DSU, with little more than black curtains, well-timed use of lighting, a keyboard and a single actor, Kimran Rana’s production truly lifted Sissay’s words from the page. Nothing else was needed; our focus was entirely on Darrius K Thompson, as he delivered a monologue that lasted nearly an hour, breaking only for brief ten-second blackouts. 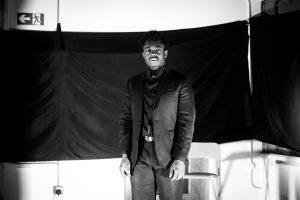 The script borrows from Sissay’s familiar territory of spoken word poetry, and Thompson used this to full effect, playing with the musicality of his speech to take us with him through the acute terror of a childhood without a mother, to sudden moments of levity that left us laughing out loud. His performance was tenacious, self-aware, and utterly compelling, shifting in and out of other characters but never losing sight of the narrative thread.

Within such a small team of cast and crew, every component was vital; to that end, Acacia To’s role as composer and pianist complemented Thompson’s performance, sustaining a theatricality to the show that elevated it beyond the spoken word tradition. In turn, the lighting kept up with the pace of the dialogue, playing on the themes of lightand dark, and neatly breaking the piece into sections via short blackouts (also giving the no doubt exhausted Thompson the chance to catch his breath and have a drink of water). As with most productions this year, the venue was not ideal and felt a little ‘handmade’ – an empty stage in a theatre would have been perfect – but the production team should be credited for creating such an intense yet minimalistic atmosphere in the corner of Kingsgate.

I knew I was going to be attending a one-man show, but it’s often hard to grasp the capacity for originality, emotional intensity and honesty such a format provides until you witness it. The beauty of the show lay in its simplicity, as the pace shifted

between heartfelt quietude and frustrated narration in moments. In Sissay’s original version, of course, he was telling his own true story; it was easy to forget that Thompson was merely playing a character, so honest was his performance. The only potential snag was the constant reference to Sissay’s being Mancunian; Thompson’s distinctly southern accent did not match up, but this was easy for the audience to forgive in an otherwise highly impressive performance.

It was clear that a great deal of hard work and love has gone into this show, and it certainly paid off to create this bittersweet, memorable, imaginative production. Something Dark is one beautiful hour of poignant, funny, thought-provoking theatre, and a refreshing audience experience amid more traditional student drama.

Something Dark will be playing in Kingsgate in the DSU on Thursday 6th December at 7:30pm.