Retellings of old stories isn’t exactly a new genre. There’s something fascinating about taking a plot from long ago and trying to work it into a modern setting. You can use it to address political issues and spin overused tropes or, in the case of Soho Cinders, make a mediocre musical masked as LGBT representation.

There’s not much point in criticizing the choice to perform this play. However, with so many musicals available and so many great DULOG shows from this year I find it hard to see what the reasoning behind picking Soho Cinders was. It’s fine. The 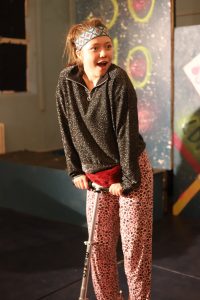 music is fine. The story is fine. But honestly, Durham Student Theatre can do better.

The plot follows a man as he navigates his way through two complicated relationships. One with a potential mayor he’s genuinely in love with and the other with a lord he really, really doesn’t like that way. Shenanigans ensue as they messily follow Cinderella like story beats through to a rushed climax where everything just kind of works itself out without the lead really having to do anything. Yay.

Walking into Hild Bede gym you’re met with a well thought out stage with various levels and posters. It’s fun and colourful and overall is used to its full capability thanks to the direction of Euan Walker. Unfortunately, this musical is without a proper tech team and band. Rhys Rodrigues does an awesome job on the piano and there is basic lighting but it’s a noticeable absence. They did the absolute best with what they had but it still gave the play a slightly amateur vibe.

Luckily the actors make up for this. Everyone did a good job and somehow made the un-fleshed out story seem somewhat believable and even compelling at times. The ensemble was dedicated and every background action that was going on was worth looking at. Katie Sterland’s vocals were some of the strongest in the cast and Annabel Dickson and Cait Mahoney worked hilariously off each other as the ‘ugly stepsisters’. Charlie Nicholson holds the show together with his naïve, likeable character of Robbie and his on-stage relationship with Mark Woods is sweet and heartfelt. Rose Galbraith somehow manages to create an interesting character out of a near nothing role and Jonny Hewitt shines as the ‘love-to-hate’ villainous William. 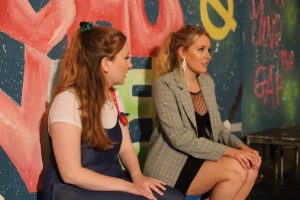 The choreography was good and fun to watch, making use of space and partner work. The cast did well performing it considering the tiny amount of time they had to prepare. It gets a little gimmicky at points, with chairs and boxing gloves that all felt a bit out of place and pointless.

A major problem I had was near the beginning – part of the set fell down. This on its own is fine, accidents happen all the time on stage and they covered it up really well. But no one properly fixed it during the interval, and it continued to fall down during Act 2 which just seemed like an unnecessary issue. Because there were no microphones, sometimes people’s voices and words got lost to the audience, making it harder to follow the plot. It wasn’t a massive issue, but it did add to the amateur vibe.

I did enjoy watching Soho Cinders but other than a few performances it’s not something that’s going to sit with me for very long. I wish this cast had had better material to work off because they’re capable of so much more. Overall, it’s entertaining. But if you’re expecting something ground-breaking, I would look elsewhere.