Francesca Davies-Cáceres has created a stunning example of one of David Hare’s finest plays. The cast tenderly and brutally explore the turbulent reunion of Kyra (Sarah Cameron) and Tom (Jack Whitmore) in the one evening that they muddle through the complexities of a six-year affair and their unwavering beliefs in the political and social ideologies that tear them apart.

David Hare’s play is a masterpiece of political theatre. Tackled by the likes of Bill Nighy and Carey Mulligan, actors for decades have loved to sink their creative teeth into a plot that includes emotionally poignant monologues on the nature of grieving and turbulent, unapologetic rage against political institutions who do anything other than the real job at hand; ‘if I didn’t do it’ Kyra yells, ‘it wouldn’t get done’. Hare’s play is so easily at risk at becoming simply a fight of ideology, a ‘good’ versus ‘bad’, but the talent, chemistry and pure emotional investment Cameron and Whitmore share with us as the warring ex-lovers ensures this never happens. From the moment Whitmore enters the space, his tie impeccably knotted, and a bottle 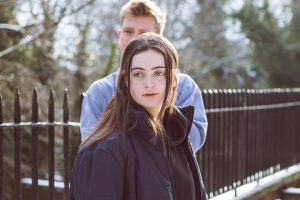 of Bell’s whisky in hand, we see the sparks of passion and frustration sizzle as both characters hotly debate the ethics of the business world – ‘Frank isn’t people’ Tom declares, as Kyra challenges him on leaving his driver sitting in a Mercedes underneath the window, ‘Frank is a man doing his job’ – and gently reminisce on the situations that bought them together in the first place. Cameron and Whitmore are superb, transforming the intimate and cleverly utilised space of Cafédral cafe into Kyra’s run-down kitchen, both a tragic battlefield and a spot of tenderness and intimacy. Whitmore’s physicality of the overworked and uptight businessmen goes beyond Hare’s dialogue. Even simply in the way he opens the whiskey bottle, such a dominant presence on the stage, beautifully complements Kyra (Cameron) as she holds the space and refuses to be undermined by his cruel put-downs of her new existence. She pours her talents into those who fight everyday to survive.

Credit must be given to Kishore Thiagarajan-Walker, who lends both a humour as the slightly spoilt son of a thriving businessmen and a sadness at coping alone with a neglectful father so pre-occupied with a poisonous mixture of guilt and anger. Edward’s (Thiagarajan-Walker) entrance at the conclusion of the final act provides both a flawless break from the last scene’s tragedy but also an added poignance. Edward and Kyra at the heads of her table as both confidantes and friends, whilst they laugh and devour croissants, is a striking visual image on which to conclude the play.

Davies-Cáceres has ingeniously used the space. Even the raucous noise outside the window by Durham students on their way to The Library Bar can’t interrupt the flow of the performance, surprisingly it adds even further to the gritty, grounded naturalism of the piece. Extra credit must certainly be given to Cameron for managing to cook a spaghetti dish whilst Tom seeks to draw out reminiscences of their past together. It is the challenge of Hare’s script, but also a gift to the actress who artfully multi-tasks in the space. The play is at its most powerful in its striking speeches and moments of poignant silence. The tension of the two actors embracing at the conclusion of the first act, Tom’s heartbreaking speech about the loss of his wife, and Kyra’s tearful challenge to Tom’s handling of the affair are moments that immediately spring to mind, but this play is riddled with them. I cannot extend more praise to Cameron and Whitmore for their sophisticated and mature handling of both the extreme and the fragile moments in this piece. The one constructive note I would give to this play is that too often 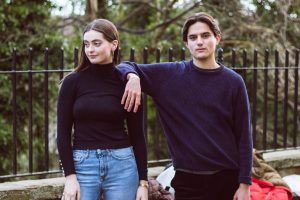 aggression seems to lead to the throwing or breaking of something. A seemingly obvious and natural way to relieve a character’s tension after a moment of rage, but in such an intimate theatrical space it seems more to break the audience’s focus as books fall near their feet and water is sprayed across the space. It is a minute note, but only a small shame for the audience, who otherwise find it hard to take their eyes off the sparring couple.

David Hare’s ‘Skylight’ will always be a stunning classic in theatre, ingeniously constructed from beginning to end. But with such a rich theatrical history, Davies-Cáceres and her cast more than match it in this intimate and portrayal of what we are encouraged to believe will be the last night Kyra and Tom will ever spend together.

Skylight will be playing at Cafedral at 7:30pm on Sunday 17th February.