REVIEW: Singin’ in the Rain

The DULOG Gala show is usually the highlight of DULOG’s year, so my expectations were high as I entered the Gala Theatre. There were certainly many moments in Singin’ in the Rainthat lived up to those expectations, but for me the show as a whole did not quite match up to previous years, despite superb performances from some of the cast.

The performances from Rosie Weston as Kathy Selden and Jamie Blackwell as Cosmo Brown gave me some of my highlights from the show. In particular Weston’s performance of ‘Lucky Star’ in Act 1 was absolutely beautiful, and easily one of the best 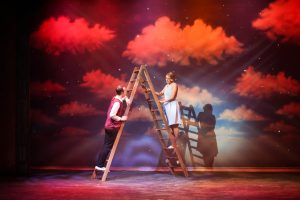 numbers I have seen in many years in Durham. When Blackwell appeared on stage it was always accompanied by an increase in energy, and he brought out the comedic side of the character terrifically. Annabel Dickson as Lina Lamont was another person who did an excellent job at bringing out the comedic side of her character, and her more diva-esque moments were some of the funniest moments in the show. However, for me these performances were let down to a certain degree by Don Lockwood (Charlie Callaghan), who, although he gave excellent performances in parts, did not reach the same high standard as the other three main characters, although the quality of his performance increased as the night wore on.

The supporting cast were also very good, particularly Owen Kennedy’s R.F. Simpson, whose presence on stage always guaranteed a boost in energy levels, and who covered a timing issue on a projection superbly. There was also a cameo from Durham alumnus Jeremy Vine, which I won’t spoil by going into too much detail, but suffice to say had the audience in stiches.

The ensemble cast were generally good at supporting the main cast, particularly in the more comedic moments. Dancing wise in the larger group numbers the ensemble performed well, despite a few of the performers breaking character as they delved into the more complex parts of the choreography.

The direction from co-directors Kimran Rana and Ed Rees was variable. In the more comedic moments the humour shone through and the audience, including myself, were left in stitches, but the show fell a flatter during the more romantic and 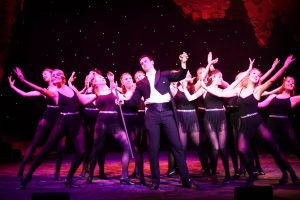 serious scenes. Luckily, the most iconic numbers in the show, such as ‘Make Em’ Laugh’, ‘Good Morning’ and the titular number ‘Singin’ in the Rain’ itself, were superbly done, and really brought up the energy levels on the stage – which was needed in the dip towards the end of Act 1.

One of the best elements of the show for me was the incredible orchestra, led by co-musical director and conductor Alex Mackinder. Even when a rogue show flew into the pit during the first half they did not drop a beat, displaying the professionalism that they carried throughout the show. Within the band itself I was particularly impressed with the brass section, who performed the trickier sections with aplomb.

The choreography, designed by Megan Clark, was for me, again, somewhat variable. There were certainly many excellent routines, particularly the small cast numbers, that partially made up for the coordination issues in some of the larger numbers. In particular, the numerous tap routines were superb and highlighted the dance skills of Callaghan, Weston and Blackwell. However, there were no numbers that blew me away, and I was left a little disappointed at the end of the larger numbers that were designed to bring the energy up on the stage.

On the technical side of things, the crew, led by technical director Alok Kumar, performed well despite some minor first night issues, such as a projection that caught on one of the tabs, and followspots that appeared at seemingly random parts of the 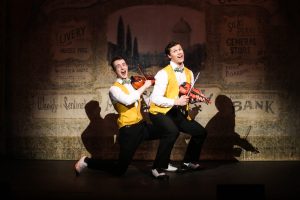 stage before zeroing in on their desired location. The sound crew, led by sound designer Ryan Harris, were partially hampered by the perennial Gala show issue of radio microphones, which during the first half occasionally cut out, but by the second half this issue was corrected. Despite these minor sound issues, the overall balance was well done, and there were very few points at which the cast could not be heard completely over the band. The lighting, designed by Peter Noble was excellent, particularly during some of the more energetic numbers, such as Broadway Rhythm. I am certain that in future performances all the teething first night problems will be completely ironed out, and the technical side of the performances will run smoothly.

Overall, despite many moments when the production all came together well, and some stellar individual performances, I felt that the show overall was missing some of the sparkle of previous years, so although for me Singin’ in the Rain was an entertaining way to spend a January evening, it was not a production that will stick with me for a long while.