Review: She Loves Him, He Loves Her Not

Francesca Davies-Cáceres is left with mixed emotions after STAB’s attempt at commedia dell’arte. 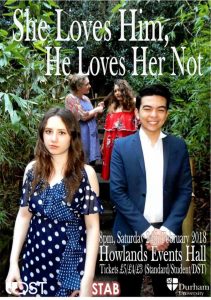 STAB’s take on Andrew Piñon’s She Loves Him, He Loves Her Not made an impact on the audience from the moment we entered the performance space – the production team had marked out the stage by lacing it with vines, a coffee shop menu taking pride of place centre stage. The charming childishness of it all was echoed in the performance itself, brimming with enthusiastic highs, as well as its fair share of lows. However, despite the somewhat vacillating levels of energy and volume, I found myself walking out of the play oddly touched by the characters and their ‘love wins all’ ending.

The first act had the task of introducing the vast array of characters to the audience, and due to this necessary ballast of exposition, the energy often dropped. Otherwise funny, and well delivered, jokes were lost in the awkward pauses between cues, and on occasion some jokes were set up that really had no punchline – the strange appearance of a whistle to blow, for example, which I had to have explained to me after the play had finished. Nerves could perhaps be blamed for the inconsistent acting; actors sometimes failed to react to the other people onstage with them, contributing to a lack of energy and a lackadaisical performance leaving the audience confused. Nevertheless, the play quickly picked up at the start of the second act, with the cast very obviously gaining confidence in their portrayals and performances.

Although the whole cast should be commended for sticking to a script that demanded, on occasion, wordplay and left-field jokes, the stand out performances came from John Duffet’s Flavio, the bombastic traveller promised to Isabella. He commanded the stage in his shock-introduction of the second act, and detailed his own ‘death by dismemberment’ with delightful comic timing. Squeegie, played by Andrew King, absolutely shone in his role as the bumbling pirate-apprentice, delivering his lines with pure enjoyment for each of them. His physical comedy and understanding of timing advanced the pace of every scene he was in, bringing to the show the quick-fire comedy typical of commedia dell’arte. It was also obvious that Hannah Newman playing Rosaletta relished every moment on stage – her sheer dedication to the role, even when simply standing at the back of a crowd or spooning out spaghetti, resulted in an endearing and hysterical portrayal. Her reactions to the lines of the other characters were sometimes distracting from the main performance, but that simply is a credit to her.

It was interesting to see that a play which advertised itself as a commedia dell’arte piece incorporated none of the ancient theatrical tradition beyond names and plot, such as the masks, or the stock character movement that has somewhat come to define the genre. It did seem as though the commedia concept, upon which the tradition and history of the script was hinged on, was completely ignored aside from borrowing the names of the famous commedia dell’arte players.

Arleccino’s cat-like walk, Pulcinnella’s top-heavy swaying, and Dottore’s bumbling pseudo-intelligence were all cast aside; obviously the portrayal of a character is up to the actor, but perhaps it was unwise to market the production as a commedia dell’arte piece if there was never any intention to tie it to the tradition.

However, the infectious enthusiasm of the cast stayed very true to the spirit of the commedia, once it emerged. The first act suffered from odd pacing, and general undulating energy levels, leading to the audience suffering from whiplash from the sudden changes in mood – a strong beginning in the cafe dropped its pace due to a lengthy transition, all for the sake of moving two tables. With a twelve-strong cast, there really was no reason for the transitions to have taken quite so long, leaving the audience staring blankly at an empty stage. This, on one occasion, however, worked to the play’s favour – watching someone crawl across stage in an attempt to move a cardboard well for forty seconds was an unexpected source of comedy in an otherwise dragging transition.

Director Emma Williams ought to be commended for her blocking of the opening of the second act, which was a hasty recap-montage of the first half, performed as though the whole cast were on fast-forward. The complicated dodging and racing about on stage utilised the space wonderfully, and catapulted the audience into the second act, riding on the high. However, not all scenes were executed with this same level of attention, unfortunately meaning that characters were often stuck in one place for prolonged periods of time. This, on the other hand, could be attributed to the setting – the Howlands building of Josephine Butler College – restricting the movement in a way a more traditional performance space would not.

Ultimately, She Loves Him, He Loves Her Not is a wonderful starting place for STAB as a growing theatre company, showcasing promising talent evident in the Butler student body. With a bit more polish, and maybe a smaller stage, the production could become nothing short of wonderful. In the end? This was a haphazard show, with a sweet heart and endearing moments, marred only by nervous energy, which predicts a fine future for STAB and its performers.