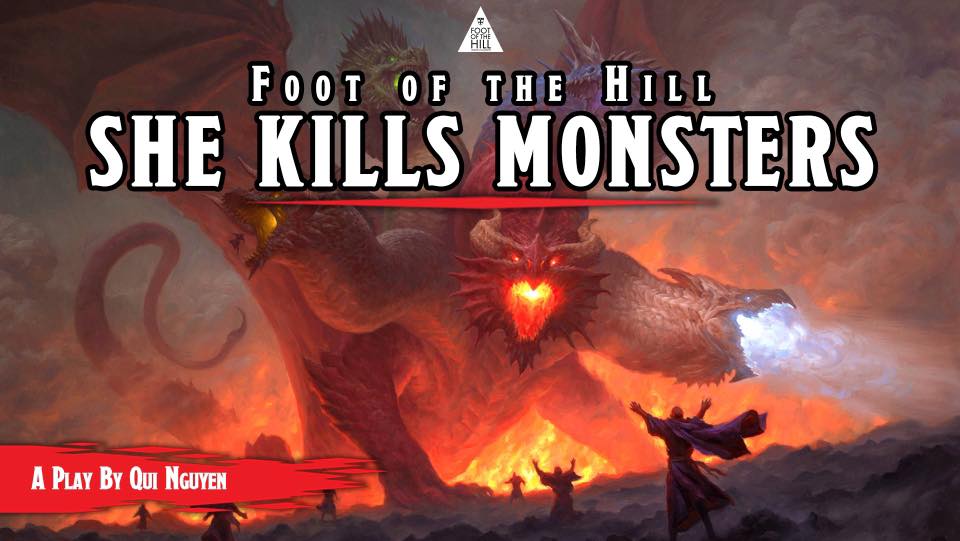 “a love letter to all things nerdy and fantasy”

‘She Kills Monsters’ is, at its heart, a love letter to all things nerdy and fantasy, and this shows in the sheer fun the cast were having throughout. It tells the story of the young Agnes, played assuredly by Becca Duckworth, and her attempts to deal with the loss of her younger sister Tilly (an energetic and engaging Rigel Cian), by exploring her sister’s biggest passion: Dungeons and Dragons. It was extremely refreshing to see some brand-new faces to DST in the production, and it can definitely be used as an example for others shows in the outreach and inclusivity that has gone into the casting.

The story centres around a central party of D&D players, led by Tilly, that Agnes joins. The story is told through a mixture of naturalistic acting, physical theatre and, at one point, a comedic dance battle! The fight scenes, choreographed by Ella Al-Khalil Coyle, were incredibly well put together and mostly well executed, although I feel that sound, both in the context of music and the actors’ screams, could have been utilised to enhance the peril of these scenes further. A particular highlight for me would be the initial fight between Agnes and the Bugbears, as well as Siobhan Gardiner, playing Farrah the fairy, who’s badass dance ability shone through. Duckworth and Cian, while unfortunately not fleshed out too well by the script, gave very mature performances and really held the show together, and I was genuinely touched by their more emotional moments.

The play, at times, struggled to find an atmospheric balance between comedy and emotions, including some of the darker jokes falling flat due to misplaced comedic timing. However, for me, the standout performers in the show were often those delivering the more comedic elements. Orcus, the lazy ex-lord of the underworld, played expertly by Dylan Hicks, was instrumental in keeping up the pace of the group dialogue and definitely had some of the “coolest” dance moves. James Porter, making his DST debut as Chuck, managed to play the stereotypical nerd to great affect and many laughs. Jack Slater’s hopeless Steve was magnificent, and I found myself wanting him to cameo in even more scenes.

The two love stories at the centre of the play, Tilly and Lilith, and Agnes and Miles, were played very tenderly, with Matthew McConkey playing a very loveable if clueless boyfriend, and providing a great “straight guy” (pun intended!) for Chuck to bounce his jokes off. Laura Murphy played a confident Lily/Lilith, but at times the chemistry between her and Tilly felt a bit flat. I feel like more casual intimate moments between them, once their romance had been revealed, would have served to make the eventual reality of their situation more heart-breaking. It was, however, refreshing to see a queer kiss happen so naturally on stage, without being played for comedic effect.

Rex Munson, as the narrator, did an excellent job of entertainingly bringing the play together, as did the use of a shadow screen, and a projector at the back. The tech was excellently done by Rhiannon Morgan, and the design and props team deserve commendation with the amount of work that must have gone into creating the dragon heads. I particularly liked the use of different coloured lighting for each character in the party.

All in all, ‘She Kills Monsters’ is a feel-good romp through a fantasy world and brings some refreshingly different ideas to the Durham stage. Despite a few issues with projection, director Sophie Tice has created a well rounded and engaging piece, and I left the theatre in the highest of spirits.