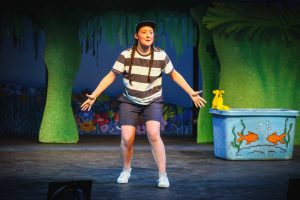 As their biggest-scale musical of the year and, equally, one of the first DST shows of 2018, I was excited to see DULOG embracing contemporary musical theatre in their production of Seussical at the Gala Theatre tonight. The show follows the story of Jojo, a tiny ‘Who’ living on a planet the size of a speck of dust, and Horton the elephant, who finds this planet and vows to protect the Whos. DULOG successfully packed the theatre with colourful characters and impressive music, kicking off Epiphany term with a bang (or, should I say, a ‘YOPP’?).

Aesthetically, the overall production of ‘Seussical’ was stunning. The wide variety of costumes used was especially effective in differentiating the multiple characters played by members of the ensemble, and particularly the tiny Whos themselves, who were all dressed in bright blue and yellow. Unfortunately, it did seem that many members of the ensemble relied rather too heavily on their costumes in order to denote character, as their acting was largely unvaried, whether playing circus animals, hunters, or Whos. It would have been nice to see them further embody the characteristics of the various animals they played during the large group dance numbers. That said, they more than made up for this in the vast amounts of choreography memorised in such a short rehearsal period. This is clearly a talented cast, who ably filled the stage with their boundless enthusiasm. 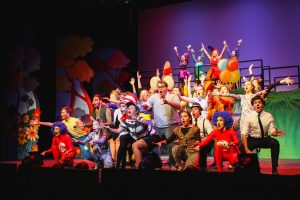 I was impressed by the technical team, competently led by Alok Kumar and Caleb Bond, and their creativity and expertise. They made full use of the lighting capabilities of the theatre, experimenting playfully with colour to evoke the childlike atmosphere of the musical. In one of the songs, the stage was lit only with UV lighting to allow for a dance in which only the foam fingers the performers wore were illuminated – this was as effective as it was innovative. The stage crew too, steered by co-stage managers Rebecca Kingston and William Hewitt, adeptly dealt with the vast number of props and set changes, despite a couple of first-night hiccups. The sound design was also notable; however, this was marred by the use of microphones. Although essential in a large-scale musical such as this, the volume of the microphones was not sufficiently high, meaning that many of the solo lines were lost beneath the orchestra, leaving the audience struggling to follow the (admittedly far-fetched) storyline. Luckily, the powerful vocals of the ensemble were able to come to the rescue in the larger group numbers. The orchestra themselves played beautifully, and co-musical directors Rhys Rodrigues and Issie Osbourne have clearly worked hard with both the musicians and the performers to produce such a remarkable show. 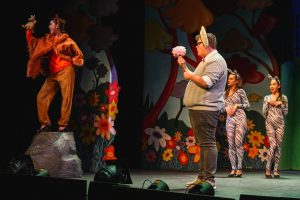 The production itself was marked by some particularly impressive individual performances; interestingly, several of these only had smaller roles which they exploited to full effect. Ben Gruenberg and Becky Brookes were delightful as Mr. and Mrs. Mayor, with carefully delineated character tics that remained consistent throughout the show, and intelligent delivery of Dr Seuss’ characteristic rhyming lines. Alex Mackinder was also a standout in his role as Schmitz, bringing a huge burst of energy onto the stage every time he entered, and Elliot Mather as Horton connected beautifully with the audience, really drawing us into the story. However, one of the highlights of the show for me was Rosie Weston’s Cat in the Hat. As the narrator of the show without a specific character arc or a real place within the story, Weston’s performance brought life to every moment of the show with her frankly hilarious cameos in several of the songs. Director Lucy Knight and Assistant Director Joanna Boyle must be commended for their creativity in these moments, weaving the Cat into the entire story, whilst providing numerous instances of unexpected comedy for the audience. Weston’s performance was animated and varied with consistent character-driven physicality, even in the carefully choreographed dance numbers, and the ensemble would have done well to follow her lead.

This production’s weak point, sadly, was the dance and choreography. It felt as if every other number in the show was supposed to be a huge song-and-dance spectacle, which left many of them lacking impact and feeling under-rehearsed. The moments in which the dance felt more natural was in the more creative numbers – unfortunately, I felt that the choreographers had placed more emphasis on classic dance technique and on balletic steps that they had on using the dance numbers to advance the plot and accentuate character. The production team would have done better to focus the spectacular choreography on just a few numbers, allowing them to feel more polished and to have more impact. That said, overall the choreography was upbeat and energetic, effectively channelling the childlike joy of the Dr. Seuss stories so familiar to the audience.

Overall, DULOG’s production of Seussical provided a joyful and lively start to banish those second-term blues. Despite the fact that show would have benefitted from a longer rehearsal period to enable the cast to examine character and strengthen their acting performances, everybody involved rose admirably to the challenge of pulling off one of DST’s biggest shows of the year.