Simon Stephens’ funny and deeply moving monologue ‘Sea Wall’, originally written for and performed by Andrew Scott, and with the stipulations that it ‘should be performed as far as possible on a bare stage, as far as possible in natural light, and as far as possible without sound effects’ is a truly testing piece for any actor. The monologue consists of a father, Alex, talking to the audience about his family, his job, and a tragic visit to the south of France, amongst a myriad of other subjects. Debates about faith and the existence of God are intertwined with this rambling, diverting narrative, and as Alex gradually gathers himself to relate the tragedy he has experienced, we see his confident, friendly aura disintegrate, falling away to grief and a teetering nihilism.

Merely holding an audience’s attention for half an hour without help from the usual theatrical supports is an admirable challenge for any one actor to undertake. In Letterbox Productions’ staging of Sea Wall, confidently directed by Helena Snider and Luke Blackstock, Kishore Thiagarajan-Walker as Alex negotiates this challenge with seeming ease. From the moment the audience begins to filter into the small performance space—an unassuming, fully lit room in Alington House, more akin to a classroom than a theatre—Thiagarajan-Walker paces in front of the four neat rows of chairs laid out for audience members, apparently gathering his thoughts, preparing to speak. When he is ready to speak, in a cleverly directed move he waits, with a 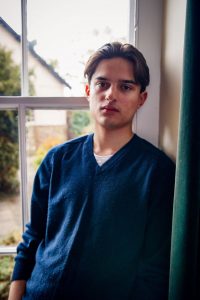 cheeky grin, for the audience to fall silent, immediately establishing a rapport between Alex and his audience. This relationship is particularly important in such an intimate performance space, where the audience and sole actor are under the same fluorescent lighting—unfortunately the long winter nights of Durham don’t allow for the ‘natural light’ asked for by the playwright—and Thiagarajan-Walker successfully maintains this relationship throughout the monologue, holding eye contact with audience members, and often laughing along with us. By building this relationship from the start, Thiagarajan-Walker has complete control over the room, holding the audience in tension throughout his pauses, and truly commanding our attention.

The major challenge of the monologue is in revealing the tragedy and its devastating impact upon Alex gradually, so that Alex’s calm, happy recollections eventually transform into a portrait of ruinous grief; yet this grief, like a hole running through his stomach that everyone can see but which no one mentions, must be present even at the beginning of the piece, veiled behind humour and storytelling. In this production, Thiagarajan-Walker manages this with his impressive control of voice and facial expression, the intimacy of the performance space allowing him to go as intensely quiet and as subtle as he needs, portraying in some touching moments, through a breathless whisper, a happy nostalgia, just tinged with melancholy, before the full impact of his grief is revealed: ‘And the idea that I was married to her. And that we had our girl. And this was our life.’ In contrast, at the end of the monologue, Alex pushes against the nihilism threatening to consume him, and Thiagarajan-Walker’s jaw trembles with the visible, physical effort his character exerts to this end, masterfully portraying a man broken down by grief.

I did wonder as I watched, to what extent this performance was influenced by Scott’s original performance of the role; I sometimes found Thiagarajan-Walker’s tone of voice, or his physicality, reminiscent of some of Scott’s idiosyncrasies. I do not however believe that this is at all damning for Letterbox’s version of this piece. For one thing, being able to produce a standard of acting that at all reminds one of Andrew Scott is certainly impressive, but in any case, it is difficult to break the mould of a monologue that is designedly written for a specific actor, and I feel that there was enough originality in the direction and the acting that it would be reductive to call this production a mere copy.

An emotional and truly impressive showcase of acting and directorial talent, Letterbox Production’s Sea Wall is a powerful 30 minutes of theatre. With a short run time that is used to great effect, if you’re able to grab a ticket, you really have no excuse not to see it.

Sea Wall will be playing at Alington House at 7:o0pm on Friday 16th November.