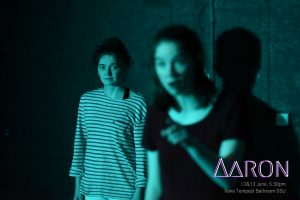 Aaron is a piece of theatre that delves into the issues of a family coping with a son living with Prader-Willis Syndrome. Taken from personal experience, Director Florence Petrie and Co-Director Patrick Palmer have created a very moving and thought-provoking show that leaves the audience really questioning themselves and wondering what they would do in the same situation.

Walking into the Vane Tempest Ballroom, the mood was immediately set with dark lighting that gave off an intense atmosphere. The location was very suitable as it was small enough that the audience felt included when the fourth wall was broken, making the experience more personal and successfully generating an array of emotions in the audience. This intimate setting meant the audience was immediately enveloped into the mind of Aaron, played by the talented Mo Hafeez, from the very first scene.

Petrie and Palmer’s decision to break the fourth wall was most effectively used with Aaron, helping to open up his world to those who have no experience or idea what it is like living with PWS. This should be commended as it made the characters far more vulnerable to the scrutiny of the audience in how they acted towards Aaron throughout the play. In addition, the minimalistic set and costume were an excellent choice as this enabled the entire focus of the show to be centred on the relationships of the characters.

Although the amount of movement in the production was largely effective, the fast pace felt rushed at times as details of the actors’ actions were sometimes lost. This clumsiness was a shame as physical theatre was such an important tool in this show. Nevertheless, the physical aspects of the show added a different dimension and mostly worked well thanks to the unity and cohesiveness of the cast. The repetitive nature of movement sequences helped convey the constant struggle faced by Aaron’s family and the relentless responsibility of caring for him.

The pace of the show lagged slightly in the middle of the play but with slick transitions, this did not last and it was soon escalating quickly towards the powerful final moments. The supermarket scene was a particular highlight as the accompaniment of the cheerful music as the cast were seen supporting Aaron through his wonderful imagination was an uplifting moment that was well-placed in the timeline of the play.

The cast were a strong ensemble, which was integral for the physical aspects of the show. The second half of the play is when the cast members really came into their own as it took time for them to really embody their characters and create real depth. Special praise must be given to Mo Hafeez for his compelling portrayal of Aaron and his incredible attention to detail with his characterisation. Hafeez evoked great sympathy from the audience that balanced the frustration of the other characters, creating a great sense of attachment to Aaron as the play went on. Isabel McGrady gave another noticeable performance as Phoebe. She professionally portrayed the anger and exasperation of a sister whose guilt and love for her brother began to shine through nearing the play’s end. In addition, her ability to multi-role as a young girl with PWS was impressive. Similarly, Catherine Wright had lovely moments as Aaron’s mother Anne, particularly whilst McGrady and Max Greenhalgh (Jacob) were on stage. It was not until the second half of the production that I truly felt the pain and desperation of Anne’s character but once this came through, the dynamic between Anne and her children became far stronger.

Overall, ‘Aaron’ is an impressive show that artistically works with an important issue that requires more awareness. Everyone involved should feel a great sense of achievement in creating such a captivating show on such a gripping and difficult subject. I highly recommend seeing ‘Aaron’ as a stimulating piece of theatre that deserves to be seen and discussed.

‘Aaron’ continues in the Vane Tempest in the Durham Student Union on both Saturday 20 and Sunday 21 October. Buy your tickets here: durhamstudenttheatre.org.