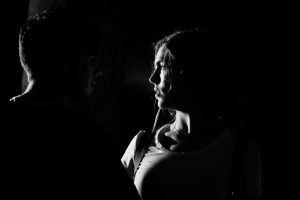 Tonight’s theatrical experience was one of contrast as I viewed not one, but two returners’ shows: ‘The East Wind Rages’ and ‘Angels in Erotica’, both student written plays that were performed last year in Durham, and more recently at the Edinburgh Fringe. To say that the tones of the two shows contrasted would be an understatement in the extreme; whilst the first had great impact and an unforgettable ending that left me in a reflective mood, the latter was a light-hearted romp that kept me laughing with witty one-liners.

Wrong Tree Theatre’s ‘The East Wind Rages’ is immediately captivating, as the performance starts the moment you walk into the theatre. The actors are already in place on arrival, singing a haunting, a cappella motif that sets the tone for the rest of the show. The repetition of this melody throughout the performance created a compelling link that tied the piece together. This tune was so effective in creating an eerie, almost sinister tone of anticipation, that the song that followed – a lively sea-shanty – appeared almost jarring in its juxtaposition. However, this sudden shift was ideal for setting up the fundamental contrast in the play: the drunk, crude and exhilarating mood of the tavern, versus the more sinister mood of the tales that were told. All in all, the opening of the show is as captivating as it is intriguing: an excellent start to what was to be an outstanding show.

The show successfully rises to the challenge of adapting Daphne du Maurier’s tale, as her harrowing short story is expressed in an insightful and meaningful way. One interesting but effective decision the show made was to seat the audience on the stage, creating a black box space wherein the audience were seated in the round, surrounding the cast. This risk paid off as it created an intimate and poignant atmosphere, especially when the curtains shut behind us – essentially enclosing us with the actors. This was particularly effective in the beginning, as an immersive sound quality was created, where it felt like the music was coming from all sides. This acted as a hook that pulled me into the performance which, coupled with a powerful use of physical theatre, created a performance of exceptional intensity. My only critique would be that this intensity was not held consistently throughout the show; there were moments when the pacing seemed to lag a little, and moments when the physicality was not fully integrated. Of course, there were also moments when stillness was used incredibly dramatically to create a contrast with the more active sections.

Overall this show was slick and well-rehearsed. The actors had a chemistry on stage that cannot be understated. Every movement was precise and the minimalistic use of props suited the performance style and space. Occasionally, I found that that the minimal lighting prevented me from fully appreciating the impressive acting on stage, which was a shame. However, the lighting choices were effective in indicating a shift between the tavern setting and the tales being told within. Consequently, I found Wrong Tree Theatre’s performance of ‘The East Wind Rages’ to be bold, evocative, and gripping, with exceptional performances from all five cast members, who held the show together in an intense and passionate performance. The audience were left with the unease that I feel an adaption of Du Maurier should provoke.

The show opens to the booming voice of God over the speakers, a trope that reminds you of every dramatic trailer ever written, but one that is used ironically to good effect within the context of the show. The performance is consistently fast-paced, which made for a polished performance, as punchlines were timed seamlessly for perfect comic effect. The standout performance of the night was Millie Blair playing the character of Cupid. The ‘Regina George’ of the angel world, Blair was the audience’s voice in a play that was otherwise ridiculous and outlandish. She voiced the audience’s disbelief at God’s enthusiastic attitude to Rachel’s erotic behaviour in a way that was convincing and added another layer to the show. 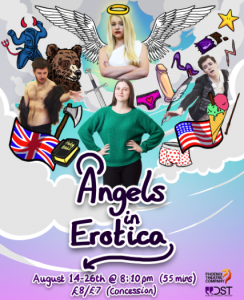 Every prop and piece of costume that was used had a specific comic purpose that helped the ridiculousness of the plot to escalate in a way that consistently drew laughs out of the audience. I did find the ending a little jarring in its attempt to find something meaningful from an otherwise ludicrous story, and I felt that this was somewhat tacked onto the end in an attempt to give the show a sense of conclusion. However, that is a very minor criticism in what was an otherwise enjoyable show. Overall, ‘Angels in Erotica’ was a show that did not take itself too seriously and had me laughing throughout. To summarise: it was quirky, witty and original, and was an ideal way to spend my Saturday night.