Fresher Ellen Tapp has her first taste of Durham Student Theatre, and experiences a night of sketch comedy and musical theatre. 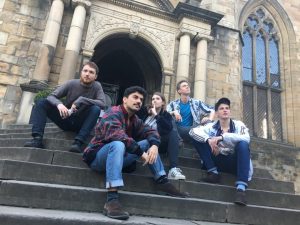 Feeling I had somewhat thrown myself in the deep end, on entering the Assembly Rooms Theatre I was initially daunted the thought of my debut review with First Night, paired with the fact that I was not only reviewing a single performance, but a Returners’ Showcase. However, as the lights went down I soon settled into the performances and enjoyed a fantastic night of theatre.

To start off the evening, ‘KEITH.’ – a small-cast, intimate sketch-comedy group, made up of Andrew Cowburn, Alex Taylor, Lizzie Strahan, and Qasim Salam, took to the stage to perform a 30-minute selection of short sketches. ‘KEITH.’, part of the theatre company ‘Buttered Toast’, are proud to be stripped of unnecessary, stereotypical sketch comedy props, making themselves vulnerable to their audience. This requires them to use their raw talent to impress, and impress they did. Their connection with the audience was second to none, achieved by breaking the fourth wall and comedic side-glances; we felt truly part of the action.

In terms of physicality, I applaud the commitment that all actors made to each and every character. Qasim Salam’s transition from what can only be described as an elegant-pan-monk in the haiku sketch to a distressed Uncle was seamless. However, in my opinion, the most commendable performance of the evening was from Andrew Cowburn. Cowburn’s vibrant use of facial expression brought his characters to life, paired with unbeatable comedic timing. Lighting was used throughout to compliment mood changes, and music between each sketch clearly defined them as separate entities. My only advice would be to establish a better balance between the voiceover and the action on the stage, as it was a little overpowering. Although each sketch had its distinctive qualities, the most enjoyable by far was the closing ‘alpha males’ musical number, where disco-like lighting, daring rap lyrics and risky actions created a sensory overload.

Following ‘KEITH.’, the evening commenced with highlights from last year’s musicals. As a musical theatre performer myself,

I was especially excited for this part of the evening. DULOG began with a couple of numbers from the contemporary musical ‘Zanna, Don’t’ – where homosexuality is the norm and heterosexuality is taboo. First was a quartet, with each singer following an individual melody line, demonstrating the technical excellence of both the performers and the pianist for the night, Rhys Rodrigues. Matt Jackson and Danny Booth performed with a perfect simplicity and conveyed the nervous adrenaline rush in their duet ‘I think we got love’. DULOG also showcased songs from their Edinburgh Fringe show ‘Edges’, where I was specifically impressed by Emily Hardy’s diction throughout such a fast paced, complex number.

Tone Deaf Theatre Company (tdtc) chose to showcase pieces from ‘Songs for a New World’. Becky Brookes and Sam Baumal have voices that complement one another on a new level: angelic but meaningful. I enjoyed how the song was performed, with both actors first facing the audience, and then embracing each other to finish in ‘I’d Give It All For You’.

Durham Improvised Musical (DIM) was the finale, and what a finish to a talent filled evening it was. To this moment, I still have a few of the lines in my head, especially ‘we have big ones, small ones, ones that vibrate’ (the audience setting, song, and title suggestions of ‘Sex Toy Shop’, ‘Crab Claws’, and ‘Return of Detective Grumble’ led to a rather adult improvisation).

The entire time I was in awe of the ability for the company (Sam Baumal, Lily Ratnavel, Barney Mercer, Rosie Dart, Danny Booth, Rosie Weston, Rhys Rodrigues, and Florence Russell) to think on their feet and create a piece of theatre there and then from a few audience prompts. I was especially impressed by Rhys’ confidence in himself and the rest of the company to just start playing a few chords when he felt it was the apt time. The technical skill in this improvisation was also wonderful; with lighting changing to blue during the ‘aquatic kink’ song and a bright red when ‘Crab Claws’ was performed. They even found sound effects to compliment any situation, to which the cast responded to every time. I don’t think I stopped smiling for this entire forty-minute improvisation, and look forward to attending their full show on the 29th October. I would have to give the most impressive one-liner to Florence Russell – ‘We’ve had scales, tails, octopus ink, but only crab claws satisfy my aquatic kink.’

I can honestly say I wish I had been a fresher last year, so I could have been around to watch all the shows in full. It has filled me with excitement for the opportunities to come and I feel I am probably going to blow my student loan on Durham Student Theatre tickets this year.