Ellie Farrell is moved by the revival of Kate Barton’s submission for the Durham Drama Festival 2017. 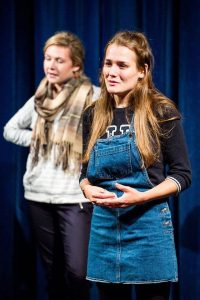 Jarring, powerful, and poignant: Kate Barton’s ‘Screen 9’ hits home with intense realism and emotion, as her script and direction charters the events of the devastating massacre in Aurora, Colorado during 2012’s premiere of ‘The Dark Knight Rises’. Barton’s script chronicles the lives of four ordinary people shattered by the horrific events which unfolded. The minimalist cast plays to the strength of the performances with all four key cast members delivering strong, emotional performances, to provide a snapshot of four demographics of people on whom the tragedy had an impact – a mother, a young doctor, a grieving young woman, and a shattered young man. Their unified presence onstage at the play’s close was representative of how all four characters, despite their differences, were united in their shock and grief – the effects of which are still being felt five years after the event.

The use of lighting aptly intensified the jarring contrast of normalcy with tragedy; beginning with darkness and contrasted with bright lighting, it was symbolic of just how quickly lives had been changed by a short three minutes of chaos. Simplicity defined the structure of the play and exemplified how a normal night at the cinema had quickly descended into adversity and bloodshed. As a consequence, the realism shone through, with all aspects of the performance facilitated by simple costuming and relatable, well-defined characters. Although not particularly physically demanding, each of the four roles were undoubtedly emotionally draining with the harrowing effects of the tragedy worn on their faces throughout the play’s course. 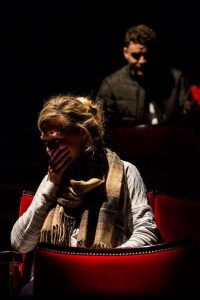 With the benefits of a relatively small proscenium arch stage (the performance used only the apron of the Assembly Rooms Theatre’s stage), the four actors were able to create an intimate acting space for a fully immersive experience. In a particularly outstanding moment, the four actors joined the audience in their seats, which served to heighten the intensity of the shared fear of all of those in the cinema that night. Through dialogue which increased in volume and frequency, with the voices fighting against each other, they were able to emphasise the frenzy and panic of the moment of the shooting. With dialogue lasting longer than three minutes (the actual duration of the shooting), it painted just how slowly time must have progressed for those at the heart of the attack. As one particularly poignant line said, it was a “snapshot of time frozen”. Being surrounded by the actors re-enforced the idea that this could happen to anyone, at any time, and was utterly unsettling on account of this. The looming display of the time above the stage served to remind the audience of the frailty of life and how we should value it and not take it for granted. A gentle transition changed from the time to the names of the twelve victims displayed above the stage, the actors retreating and silence befalling the theatre to place sole emphasis on those who lost their lives to ensure that they won’t –and can’t– be forgotten.

The silence remained long after the curtain-fall –a testament to the extensive research, profound performances, and empathetic dialogue. Filled with a powerful script, simplistic direction and emotional performances, ‘Screen 9’ is certainly full of impact, and remains with you long after leaving the theatre.