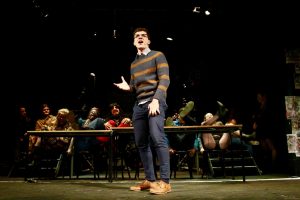 Few things give me more joy than a well-directed, well-staged musical, and DULOG’s RENT definitely ticks all these boxes. The show was able to successfully recreate the distinct historical atmosphere of New York in the 1990s, whilst showcasing musical talent – as well as conveying a deeper message about what it is like (and was like) to live amidst adversities like poverty, HIV/AIDS, and drug addiction. Although the show did have some shortcomings in its technical aspects, in sum it was a production that offered both a palatable sense of humour, and some tough food for thought.

The staging itself was very effective in creating the distinct early 90s ‘bohemian’ atmosphere of New York in which RENT is set. The set, from the rock music posters plastered on the walls, to the industrial-like metal structure looming over the stage, immediately transported the audience to a dingy apartment in East Village. The metal structure also played nicely into separating time and space in the story, though at some points this separation did cause some confusion as to where the main action was happening. 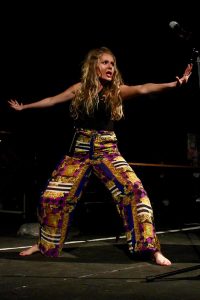 The show’s driving power lies its cast’s and crew’s undeniable musical and choreographic abilities, as well as the show’s capacity to maintain balance between the comedic and dramatic. The ensemble in its entirety was well coordinated, and their recurring appearance added a dimension of humor and comedic effect to the play when needed. The main cast also shone in their individual characters, with their varying vocal ranges and techniques that captured their diverse, vibrant personalities. One particularly impressive performance was delivered by Rosie Weston, in the role of the performance artist Maureen. Weston’s stage presence was immense, and I especially enjoyed her magnetic performance in ‘Over the Moon,’ where she consistently made the audience burst out in laughter over her eccentric character portrayal.

The band also deserves recognition, as they gave a consistently laudable performance for each number, though often the instrumentals were a bit too overpowering, to the point where the voices of the performers were muddled and the lyrics did not completely get across. There were also a few technical mishaps that took away from the otherwise excellent musical numbers. 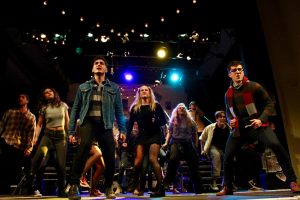 Nevertheless, the show left my ears charmed by the angelic and soulful voices of the cast, my head thinking back to the physical and emotional mark that HIV/AIDS has left on the lives of people, and my feet reluctant to go home. Overall, DULOG’s RENT was an excellent rendering of Larson’s original creation, and if you want to treat your ears and eyes to a bonanza of musical talent, as well as gain some insight into what it is to love despite all circumstances, then I highly recommend going to watch RENT.

DULOG’s RENT will be playing in the Assembly Rooms Theatre at 7:30pm until the 11th November, with an additional matinee performance on the Saturday at 2:30pm.