Should I tell my colleagues I’m bisexual? Do I have a responsibility to perform my queer identity? Can I go to church as a queer person? Why do people keep asking me if I like threesomes?

These are some of the questions Sophie Wright seeks to address in Queerbaiting, her new show exploring queer through the friendship of two bisexual flatmates, both of whom are called Elizabeth. As a bisexual woman myself I was excited to see such topics raised, particularly by Saroja Lily Ratnavel and Maddie Lock who are both such thoughtful actors. However, the writing unfortunately lacked nuance and felt, at times, more like a lecture than a genuine conversation about the queer experience.

Wright’s premise has great potential: the subtitle ‘Jess and Jules should’ve kissed in Bend It Like Beckham’ establishes the comic feel that characterises the most successful moments of the piece, whilst also attaching the characters’ discussion to the 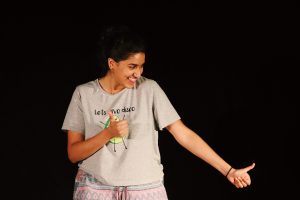 wider issue of media representations of bisexuality (surprise: they’re rubbish). The naturalistic set provides a comfortable backdrop for the discussion as the two friends sit on their student sofa and eat takeaway in amongst an organised chaos of books and empty bottles. Ratnavel and Lock were largely believable as the occupants of the flat and beautifully captured the unique tenderness of female friendship. A particular highlight was Ratnavel’s hilarious living room dance interval (complete with hairbrush microphone) which Lock’s character walked in on with a knowing laugh. An awkward discussion about rent also prompted some knowing groans from the audience. The central discussion of bisexuality was also successful at points, as the conflict of Ratnavel’s exuberance and Lock’s visceral anger and confusion demonstrated the often fraught nature of queer existence in a heteronormative society.

However, though Wright’s efforts to tackle so many aspects of bisexuality are commendable, the script wobbles under the weight of the questions it seeks to answer. For a piece so concerned with the notion of subtext – a notion which is crucial to queer translation of heteronormative movies and discourses – the play had little depth. Statements such as ‘being queer is [about] so much more than who you fall in love with’ were made without follow-up. At one point, Ratnavel’s physically straight-presenting character (in ‘feminine’ pajamas with long hair) said ‘I don’t look straight’, which was slightly baffling as the character perpetuated a limited notion of ‘how queer people look’ without really taking responsibility for the implications of her comment. The play also made virtually no attempt at properly addressing the intersection of queer with race, class, religion or gender, which was disappointing in light of the use of Bend It Like Beckham as a cultural touchstone. For example, Lock’s character told a story about her inability to reconcile her faith and her sexuality which seemed out of touch with current discourses about the validity of LGBT+ religious spaces. A minor criticism would be that the use of ‘Lizzie’, ‘Beth’ and 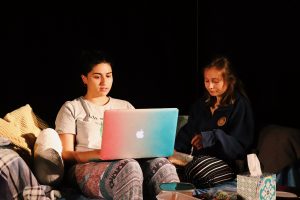 ‘Elizabeth’ to refer to both characters made the conversation difficult to follow.

This said, Queerbaiting is still admirable insofar as Wright creates space for a new discussion around bisexuality, an identity so often erased and misunderstood in both queer and straight spaces. The anchoring concept of two friends trying to choose a movie to watch also enabled a brilliant analysis of representations of queer in cinema, including a hilarious comment about Cate Blanchett’s questionable performance in Carole. Kimran Rana should also be mentioned for her direction, which made full use of the living room set to convey the relaxed intimacy of the two friends. The closing moment of the play, with Lizzie and Beth sitting side by side on the sofa offered a satisfying sense of resolution to the comic-dramatic discussion.

Ultimately, though I was disappointed not to feel a full connection with the characters or to see a really nuanced presentation of queer, the piece has clear potential. To borrow the football metaphor from Bend It Like Beckham, the play takes a shot at exploring the complexities of bisexuality and hits the goalpost. However, with a little practice and refinement, I’m sure Queerbaiting has the potential to score.