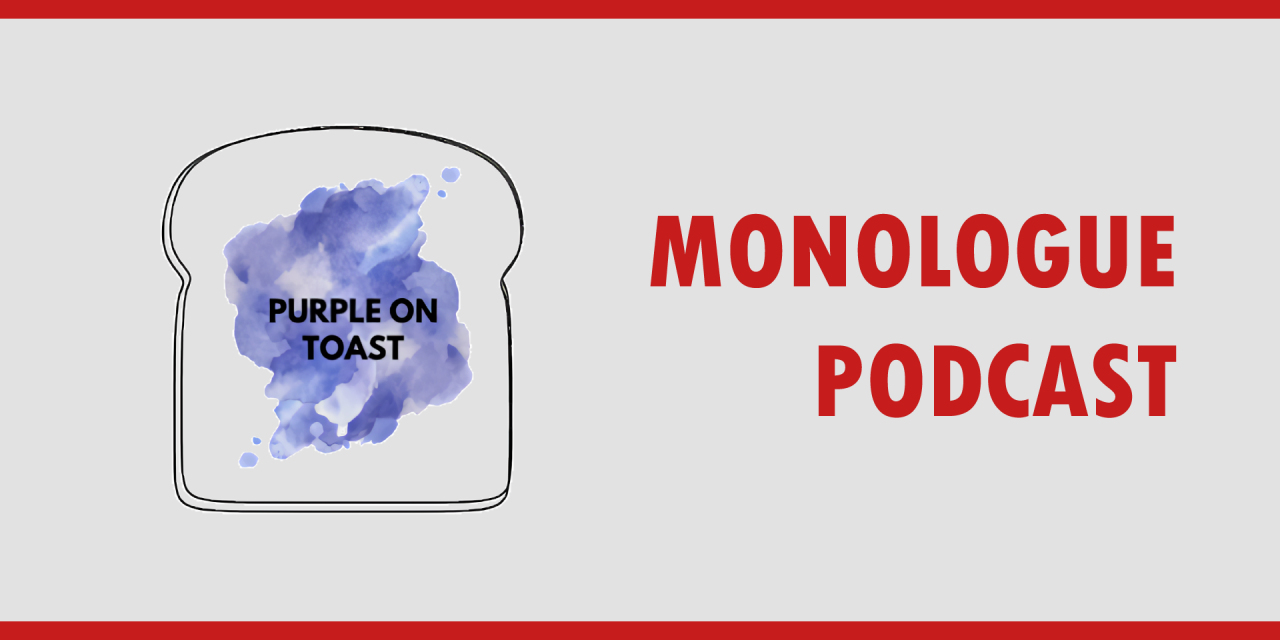 ‘Purple on Toast’ by Purple Radio and Buttered Toast is an exciting collaboration on a podcast series showcasing a variety of new monologues. In total, the podcast consists of five episodes, all but the last including two monologues exploring a whole host of themes and issues, from domestic violence and the supernatural, to the perspective of human statues and self-proclaimed ‘poshos’. Each actor, writer and director of every monologue brings something truly unique to this project, and with there being such a broad choice of genre you can’t go wrong if you’re looking for some inspiring theatre to cosy up to.

Episode one has a beautiful energy to it, from the dry wit and sarcasm of Issy Flower and Jeff Dunne’s writing and acting to the lovely attention to detail of Megan Cooper’s writing. Flower and Dunne work superbly as a creative pair and do not disappoint – unlike the many postponed or axed events of 2020, which they explore in ‘Cancellations’. Furthermore, Thalia Agoglossakis-Foley’s ability to create supernatural tension from beyond a screen in ‘Ghost in the Kitchen’ is impressive and, as she portrays a single mum assessing an unusual situation, humbling. Thalia is a voice actor with great potential. This episode is an excellent introduction to the series and settles the listener into the variety of styles and punch that they can expect across the series.

‘Purple on Toast’ also experiments with the theme of isolation in a new and desperately needed revived sense in ‘Until Break Time’. Ryan King’s writing is brimming with character, so it is not hard to see the potential in this piece’s performance by Thomas McCubbin had it been more developed. It would have been great to see slightly more direction and characterisation in this piece. It sometimes felt as though the rawness of the moment lacked continuity, although there are some memorable acting moments throughout. The other monologue in this episode, ‘Statue’, is a piece to be cherished and re-listened to whilst you have the chance, as Rory Leventhorpe and Tom Murray get to the bottom of the endurance and viewpoint of a human statue. This monologue is delicate, bold and hilarious in its writing and delivery, striking a nice balance with light and shade. It’s hard to believe Leventhorpe isn’t actually a statue.

Episode three is visceral. Both ‘Megan’ and ‘100 Calls a Week’ leave imprints on the listener with their thought-provoking writing and performances. ‘Megan’ really feels like a moment; Elanor Kris’ enthusiasm is something to sit with and enjoy, as Maeve Moran’s lush and descriptive writing pours out a delight to the theatrical senses. It is wonderful to listen to a monologue and gauge such a strong sense that the performer is truly enjoying their craft. On top of this, Harry Jenkins, Adela Hernandez Derbyshire and Gregory Vines outdo themselves in ‘100 Calls a Week’; everything about this recording is guttural and real and tackles the issue of Domestic Violence in a mature, raw and resolved manner.

In episode four, those involved in the project go above and beyond in exploring morally reprehensible characters in intriguing ways. Issy Flower shines again with unravelling and laugh-out-loud creepy writing in ‘Burial Ground’, matched perfectly with the brilliant performance of Francesca Chaplin and direction of Caitlin Barratt. ‘Burial Ground’ is a real treat. Moreover, in this episode, Rob Caesar delivers a hilarious out-of-touch character the listener will love to hate in ‘Posho’, aided by Jacob Freda’s inspired writing. The ability to conjure up a character who creates such a striking first impression is something rare and commendable.

The final episode will rock anyone to its core. Exploring violence against women in a guttural and unnerving way, ‘Pinar’ is a monologue that can’t be missed. Written and acted by Saniya Saraf and Olivia Adderley, this piece builds to a shuddering end in a goosebump worthy performance. The execution and substance are all there, full of striking acting moments where Adderley’s voice leaves you speechless and Saraf’s writing rings in your ears. Fraser Logue’s sound production adds a tense touch to this excellent ten minutes of feminist theatre that leaves its listeners questioning who they are.

This spin on COVID-secure theatre is refreshing and almost always hits the mark. Whether you’re a podcast connoisseur or just on the hunt for some stunning entertainment, these five episodes are quick, quick-witted, and definitely worth your time.

The first four episodes of Purple on Toast are available to listen to on the Purple Radio Drama channel on all your favourite podcast streaming services. The fifth and final episode will be released on Thursday 5th November. Find out more on the Buttered Toast Facebook page.