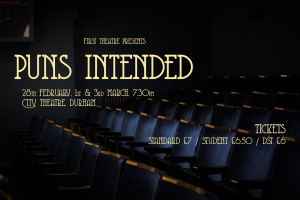 In the wake of Durham Drama Festival 2018, it is incredibly exciting to see Durham Student Theatre fostering such a supportive atmosphere for new, student-written plays. That said, after having watched Puns Intended this evening I can perhaps say that my curiosity for absurd new writing has been sated.

The basic premise of Puns Intended consisted of several characters from various literary texts, ranging from Greek mythology to the Sherlock Holmes stories, who all find themselves living in the same meta-theatrical world. Sadly, though, this basic premise did appear to comprise the entire plot, with little other action and no discernible storyline to follow. The entire audience remained seated and did not leave the theatre at the end of the performance, although whether this was a stunned silence or just that they did not know whether the play had really finished or not, I cannot say.

That said, as an English student, I was intrigued by the promise of a show in which many well-known characters, including Gatsby, Dracula and Gandalf, would interact. I was sadly disappointed; the characters were poorly drawn and barely resembled their literary counterparts. It seemed that all the characters were based only on the tropes of their genre and lacked any of the characterisation and development that made the original literary texts so popular. I was confused by the fact that some characters were very specific, e.g. Gatbsy, whereas others seemed to just be a loose amalgamation of several. I believe the writer Janina Arndt described one of them as a combination of Hamlet and Jacques, although I could detect little of either of them – the character seemed more preoccupied with finishing a bottle of champagne than with philosophising in blank verse. However, the actor, to their credit, approached the play with aplomb, and, despite some dodgy accents, did their best to keep the text afloat – although I would advise them not to swear so much when improvising during the transitions.

The show itself was lacking in production value, although I wouldn’t go quite as far as the actors, one of whom, and I quote, termed the low-budget set ‘f*cking dire’ (I couldn’t work out whether this was said in jest or not). Whilst having made a valiant effort to depict such a wide variety of characters, I couldn’t help but notice that Beatrice Scudeler’s costumes were hindered by the fact that at least two of the historical characters were wearing jeans, and Dracula’s (Abraham Mendes da Costa) fake teeth impeded his speech so much that I could barely understand what he was saying. Although the backdrops used did well in their purpose to draw attention to the artifice of theatre, in keeping with the meta-theatrical nature of the piece, the direction and technical help were lacking when it came to the transitions between them. In future, I would venture to suggest devoting more time to working on transitions, to avoid the characters having to messily haul one backdrop in front of another. That said, perhaps this was a better alternative to the lengthy transitions in which the curtains closed and Shakespearean, played by Sean Alcock, took on a new character as a frustrated actor. With snappier transitions, the action of play would be far easier to follow.

I would like to commend Janina Arndt on her considerable ambition in writing this short play. The basic premise is really exciting and does explore interesting debates on the nature of theatre. This was let down by the slight lack of plot, but with further development this script has the potential to become an entertaining piece of theatre. Durham’s developing culture of new student writing is becoming more and more prevalent, and I hope to see it continue to grow.

Puns Intended will be playing at the City Theatre on the 1st and 3rd of March at 7:30pm.