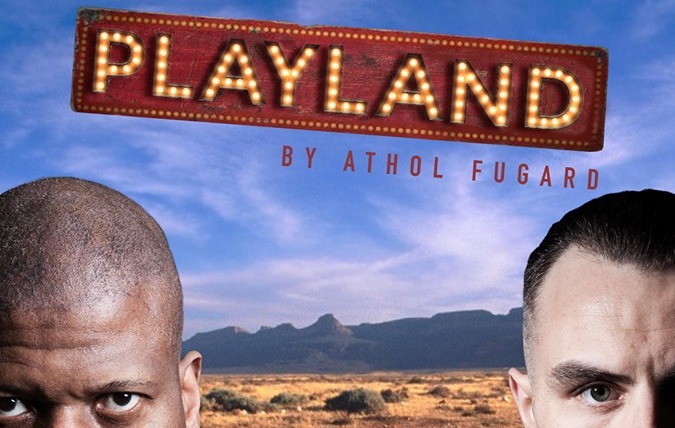 Yasmine Zong is immersed in Elysium Theatre Company’s professional production of Playland at the City Theatre, on the Durham run of their northern tour.

Despite the historical colonial connection, and the international attention given to the end of the apartheid regime only twenty-five years ago, South Africa and its turbulent history feels remote and far removed in today’s northeast England. Thus Elysium Theatre’s new production, Playland, portraying dialogues between white veteran soldier Gideon Le Roux and black ex-convict Martinus Zoeloe, on the New Year’s Eve of 1989 in South Africa, felt immensely eye-opening and insightful. Audiences were taken through a journey through a country’s dark past, experiencing complex human emotions, immersing themselves in a story of brutality, oppression, sin, anger, and eventually of understanding and hope of redemption, led all the way by a powerful interpretation and stimulating actions.

The stage design and technical teams deserve great credit for the overall effect achieved. True to Director Jake Murray’s conviction to ‘bringing to the audience another world’, the stage was transformed into a realistic corner of a late ’80s South African funfair, with hanging light bulbs, huge trash bins, bottles of wine scattering around, and the watchman’s old car with his makeshift kitchen stove. The floor was covered by dirt-red mats, creating the illusion of actors standing on the fabled red earth of South Africa. The funfair broadcaster’s colourful voice (played by Graham Eaglesham) announcing winners of lottery and the shifting light signifying fireworks in the sky further enhanced the atmosphere. Putting all of these in the small venue of the City Theatre, the audience felt like we were observing activities at this funfair’s corner intimately, close enough to smell the cigarettes Gideon was smoking. The moment the play started, a door towards a faraway land and to buried past had opened on stage.

Given that Playland is a two-man show, its success relied heavily on its two actors; both Danny Solomon and Faz Singhateh rose admirably to the challenge. Both drama-school graduates with years of experience behind them, they have collaborated extensively with Jake Murray before, and both portrayed their characters with determination and energy. Solomon’s portrayal of trauma and self-loathing disguised with care-free flamboyance was particularly memorable, especially as Gideon gradually cast off his cover to reveal vulnerability and doubts. Singhateh on the other hand was far more restrained, mainly in order to show the great contrast between the pair, as his character in turn buried his inner darkness under stoic endurance and simple religious conviction, although one did somehow feel like his interpretation could be more varied and present more ambiguity, the emotions revealed could also be stronger when approaching the climax of the play. The two characters’ interactions were charged with tensions and clashes, the chemistry onstage filled the room much more than one would expected for a two-man show, despite several moments when one felt the changes in their relationship and emotions could run less abruptly, as there were times when the change from hatred to understanding may not be ideally convincing. But then the performance of the two actors as a whole were so captivating that defects or small inconsistencies were hardly felt.

Despite the distance between the play’s setting and our own, the message of forgiveness and hope is increasingly relevant today, and the process of reaching reconciliation with one’s past moved people’s heart regardless of time and location. In the political turmoil of today, it is more and more important to admit one’s own guilt, to understand and forgive each other, and to unite together in hope of a better future. In this sense, Playland is a play that everyone should see, and Elysium’s production had done the story justice.