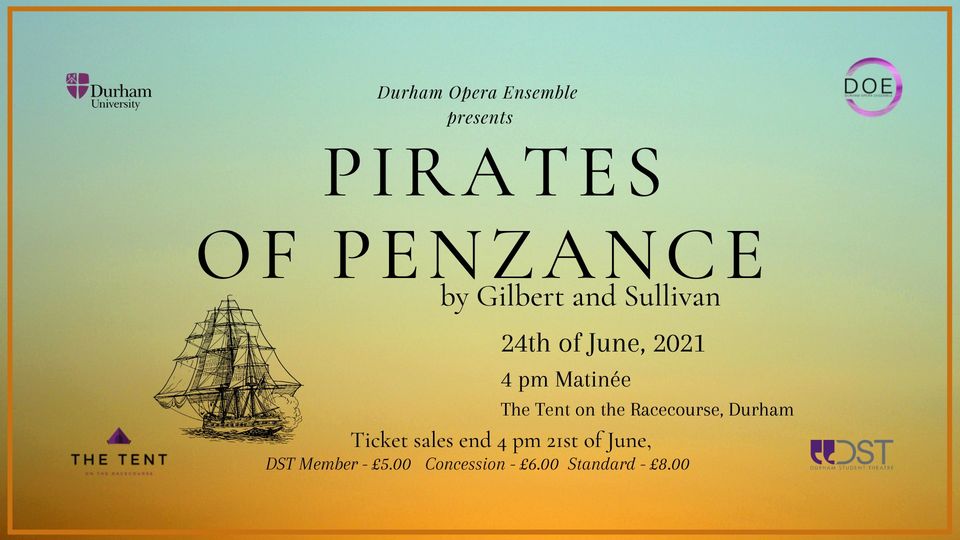 “the energy of the cast never dimmed, carrying the audience through a whirlwind of brilliant singing”

It is a massive testament to the professionalism and talent of this cast and crew that if I had not been told all this, I would not have known. The energy of the cast never dimmed, carrying the audience through a whirlwind of brilliant singing, hilarious choreography, and the outrageously silly situation-comedy of Gilbert and Sullivan. I have seen this show many times, by professional and amateur groups alike, yet I can honestly say that I have never had a better time as an audience member. The one benefit of sitting in the balcony and wearing a mask was that no one could see me shamelessly mouthing the songs, stamping my feet, and guffawing with laughter.

The two trios of the show, the policemen (James Murray, Thomas Rayner, Georgia Malkin) and the daughters (Lily McNeill, Emma Burke, Emily Tarbuck) were superb. The daughters’ harmonies were pitch perfect and their acting immensely engaging (please get together and record a “Three Little Maids”). The Police trio were pure, farcical, flawlessly ridiculous comedy from start to finish. The choreography was perfect, a credit to choreographer Georgia Malkin, but the funniest moments were when the timid and incompetent policemen did the moves entirely out of sequence. Considering that two of the policemen had stood in at short notice, these mistakes may not have been deliberate, but they certainly looked as if they were, adding to the character of this unfortunate triad.

Olivia Jones made a powerful Ruth and her passion (alas, one-sided) with Frederic was excellent. Hamish Garland’s Frederic delivered the funniest lines of the show and some brilliant vocals. His acting, specifically when speaking rather than singing, was sometimes slightly underwhelming, but this is partially due to his contrastingly fantastic presence throughout the songs themselves. Ed Wenborn made a superb Pirate King and shone as the most charismatic presence on stage. This may have been due to the seemingly impossible breadth of his stance or the fact that he led mostly with his crotch. One audience member was overheard remarking “I cannot tell if it was the actor or the pirate outfit or both, but I now have a thing for the Pirate King.”

Samuel, the Pirate King’s right-hand man, was played by James Barber with great aplomb, delivering the opening number of the show with an energy and skill that was sustained to its conclusion. Ben Osland delivered a frankly exceptional Major-General Stanley – the final verse of his famous solo at triple speed had me in stitches. Indeed, all of the cast’s singing was wonderful, but the standout performer was Mathilde Brun. Mabel is a very difficult part for any opera, let alone a comic opera, and Mathilde gave a performance which was, in essence, a lesson in what you can do with outstanding diaphragm control.

The moments in which large sections of the cast sung and interacted together were also powerful to watch. The Pirate chorus (Lydia Campbell, Rowan Downie, Georgia Malkin) thrust the audience into the action from the moment the curtain flew up. In my experience the mark of an amateur group is that the chorus tends to look slightly lost in those short, awkward, instrumental gaps between the lines of song, but this cast stayed in character throughout. The staging was a little disappointing in its minimalism, but with a show performed across two venues this is certainly understandable. The costumes made up for this, however, and their sheer quintessential “G&S-ness” is a credit to costume designer Amanda Botelho.

Meanwhile, Sarah Panek and Josh Gordon ran a seamless tech machine. Special mention must also go to pianist Adam Johnson and conductor Valentina Addis who performed in the place of an entire band without a single hitch. Director Lauren Bagge and her team should be proud of how this show and its cast pulled together. I am aware that Lauren is isolating at the moment, but I hope she may take it from me that her show was a joy to watch.

I am a huge Gilbert and Sullivan fan and while I have had to wait a year and a half for my fix, this show was worth the wait. I cannot congratulate the cast and crew enough for putting on such a brilliant show amid such difficult circumstances. I hope to see you all in a year’s time for DOE’s next instalment.