Hild Bede Theatre’s production of Pippin was a high-energy, powerfully constructed performance showcasing talent from start to finish. The show follows the titular character, played by Charlie Nicholson, as he searches for a purpose in life and experiences an existential crisis. Such a story was brought to life in a way that was at once entertaining, poignant, and engaging throughout, making for a definite success.

Before the show even begins, the ambience is appropriately set through the use of music and ensemble dancers enticing the audience to watch and enjoy their show; such a detail demonstrates the thought that had gone into communicating the story appropriately. The technical aspects of the show were impressive; in particular, the lighting was used to full effect, from the blood-red filter during ‘Glory’ to the lifting of all the stage lights during the emotionally climactic finale. Similarly, the costuming was kept simple, and as such, was very effective; costuming for a play with a medieval setting is naturally a 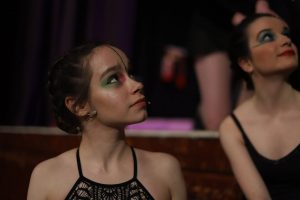 challenge, but the team was able to pull it off with no unnecessary pretension or oddities. Such attention to the show’s technicalities played an important role in making a memorable and impressive performance.

As a musical that relies largely on its showiness and energy, good choreography is key to any notable performance of Pippin, and Siobhan Gardiner managed this excellently. Ensemble numbers such as ‘Magic to Do,’ ‘Glory,’ and ‘Morning Glow’ were highly engaging and enjoyable, and the glitzy circus aesthetic presented by the Leading Player and her troupe was fully brought to life with acrobatic movement and energy. Most notable was Henry Gould’s pole dancing during ‘With You,’ who stole the entire scene with his highly impressive skill set. Overall, the ensemble was extremely strong, and, when coupled with impressive and intricate choreography, played a massive role in having the energy and vivacity of the show reach its maximum potential.

The emotional moments of the show were directed and choreographed to hugely powerful effect; in particular, ‘Morning Glow’ and ‘Finale’ were chilling renditions that completely succeeded in conveying the heart of the show. Most notably, Laura Swinton’s Theo delivering a haunting reprise of ‘Corner of the Sky’ was a profound and arresting ending, carried to full impact by her excellent performance.

There was not a single weak link in the cast, but special mention has to be given to a handful of particularly strong members. Isabel Raby took on the role of the Leading Player, and gave an awe-inspiring performance, managing to hold the audience’s attention even in scenes where she did little more than sit in the background and watch. The Leading Player is at once captivating and terrifying, and she was able to bring these nuances to life in a deeply arresting way. Furthermore, her powerful 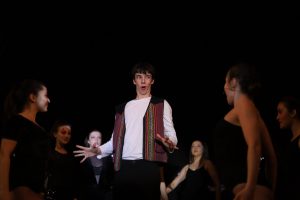 voice played a huge role in portraying an equally powerful character, best illustrated in her spellbinding ‘Glory’ solo. Georgia Onslow’s Berthe was hugely entertaining and engaging; as the script itself highlights, her single number is much longer than average, but she won over the audience with her charisma and hilarity, and was even successful in encouraging everyone to sing along during the chorus. Though she had comparatively little time on stage, she marked herself as a standout even amongst such a powerhouse of talent. Finally, Charlie Nicholson’s Pippin was just as extraordinary as his character professes himself to be; he manages to be likable and endearing in his awkwardness during songs such as ‘War is a Science,’ but then take on a profound intensity during ‘Morning Glow’ and ‘Finale’ in such a way that the audience cannot help but empathize. Charlie fully captured the complexities and nuances of his character, and fully delivered in sharing these complexities with his audience. All three of these actors’ performances were further strengthened by the clear talent and passion demonstrated all round.

Though the sound design was very strong, there were times when the band was a little too loud, drowning out the voices onstage, especially during the opening number. However, this was only a problem at select moments in the show, and in no way detracted significantly from the overall high quality. In spite of this, the band gave a very impressive performance, complementing the powerful voices onstage effectively.

Pippin will be playing in Caedmon Hall at 7:30pm on Saturday 23rd February.