Laura Hepworth is thrilled by Pitch Productions’ first play of the year.

Picnic at Hanging Rock, set in the Australian outback during the 1900s, follows the tale of a school rocked by the tragic disappearance of one of its students, while on a field trip to the idyllic setting of Hanging Rock. From the onset, the play attempts to challenge the audience, and thrill them to the core. Whilst Pitch Productions’ stylised performance did successfully get under its audience’s skin in many ways, a few elements did mean that it fell slightly short of true thriller status, though these points were very minor.

The real gem of this production lies in its technical and staging elements. Technical and Assistant Technical Director Lucien Rhys and Stella Botes, as well as Sound Operator Charlotte Atkins, produced stand-out lighting and sound design which heightened moments of tension effortlessly. Additionally, the set design was incredibly intriguing and haunting. The choice of creating a metaphorical ‘Hanging Rock’, with minimal use of the colour grey throughout, was certainly successful in capturing the audience’s attention, and was intriguing from the start. A minute quibble I did have with the choice of set was the choice to hold some action on the auditorium floor. Whilst it may have added another dimension to the play, it meant that I struggled to see the action. I found it rather odd that this was done in one of the scenes with the most action, when Sarah (Francesca Chaplin) was slapped by her school teacher (Ariana Van Biljon). Thus, I found myself feeling dissatisfied with only being able to hear what was going on. Furthermore, this choice of staging further drew the tension away from when Fitzhurbert (Ariana Van Biljon) suffered a seizure, something that can be terrifying to watch. However, again, the use of the floor meant that I could not see what was going on, greatly reducing the suspense. 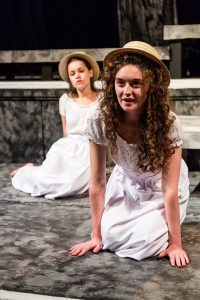 The ensemble in its entirety coped well with multi-roling, something that always proves challenging. Additionally, they managed, for the most part, to retain their Australian accents, which is not an easy feat, though they sometimes needed to take more care to maintain their accents when portraying high emotion, particularly when being upset. For me, the stand-out performer of the night was Francesca Chaplin; she captured the haunted and delusional nature of her character very well.

Costume, on the whole, added a necessary historical injection to the play: it gave it just the right amount of realism to make the setting believable. However, the choice of keeping the Constable in the dress that Catherine Wright had worn whilst playing her previous character was a small flaw in this department. Whilst I greatly appreciate that set changes and multi-roling make this a challenge, it did make Wright’s character much less believable appearance-wise.

Overall, Picnic at Hanging Rock is a very unique piece of theatre. It is pleasantly intriguing and will play games with you throughout. If the sound of this speaks to you, then I thoroughly recommend joining Pitch Productions on their final picnic tomorrow night.