Lucy Knight is touched by DUCT’s take on Timberlake Wertenbaker’s acclaimed dramatisation of The Playmaker. 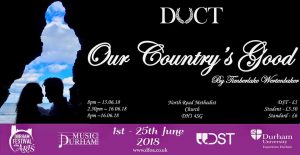 Our Country’s Good is a play which simultaneously critiques both the Thatcher era in which it was written and the 18th Century penal colony in which it is set, whilst also focussing around a performance of Farquhar’s 1706 play The Recruiting Officer. Juggling all of these timelines and social contexts is no easy task, and whilst DUCT’s production was by no means perfect, the messages of the play were handled sensitively, and there were moments of extraordinary emotion and power.

North Road Methodist Church was a somewhat unexpected location for this production, as it is not known for hosting theatrical events, yet it served as a fantastic performance space. The hull-like curve of the balcony, and the cross made from rugged-looking timber, emulated the ship in the opening scene wonderfully. Director Jess Frieze took advantage of this, having the beating of Robert Sideway ‘above deck’ take place on the balcony, whilst the convicts were sitting on the stage below. Whilst this was an effective decision, some of the effect was lost due to the beating scene beginning before the lights went down. Since the church does not have proper stage lighting, any action that takes place with the house lights up is lit with the exact same amount of light as is on the audience, meaning that the scene, to begin with, lacked a sense of atmosphere. This could have been remedied partially by the actors onstage as we arrived, who remained largely still and expressionless. Had they created more of a narrative of the ship before the beating began, the lighting may not have felt so much of a problem.

Largely, the minimalist set and costume choices worked well – a play with so many different locations requires creativity in set design, and Frieze chose to keep things stripped back. The crates were a particularly successful feature of the set, for they were indicative of both the ship’s cargo and the ‘still unbuilt’ nature of the new colony. I would have like to have seen this idea pushed further, with even more crates, so that they could be replace the tables and chairs used. This would create a more stylised set design, and would also mean that the same set pieces could be used for multiple scenes, reducing the number of slightly jarring blackouts.

Overall, the actors did a good job in telling the story, carefully navigating their way through the light and shade of the nuanced script. Harry Scholes gave a perfectly balanced performance as Second Lieutenant Ralph Clark, displaying the intricacies of the character whilst also being truly compelling to watch. Amy Howlett was also a standout in her hilarious depiction of ‘Shitty Meg’ – a character who sadly only appears for one scene. I was initially unconvinced by George Ellis’s portrayal of Midshipman Harry Brewer, for in group scenes he seemed to have too much confidence and stage presence for a low-status and self-doubting character. However, Ellis really came into his own during his mental breakdown scenes, and captured the brokenness of Brewer excellently. I did feel that during the boating scene with Duckling, though, both actors should not have been afraid to leave longer pauses, as this would have been effective in getting across the extent of the awkwardness and tension.

The majority of actors were multi-roling – to which the play is well-suited, as it forces the audience to question the officer/ convict divide. However, the actors needed to be careful to clearly distinguish their characterisations between scenes. Joe Pape was the only actor who fully achieved a palpable distinction, and gave two sensational performances – sparking genuine fear as the formidable Major Robbie Ross, then shifting his accent, physicality and tone completely to become the sweet and mild Ketch Freeman.

The biggest disappointment of the play for me was the decision to cut the character of the Aboriginal, having his lines projected on screens accompanied by Native Australian music. The screens were an interesting visual choice, and I particularly appreciated them at the end of the play, when they were used to tell the audience what happened next to the characters. However, the role of the Aboriginal adds a further lens through which to watch the play, and his physical presence as a character reminds the audience of the wider context of colonisation.

Nevertheless, DUCT certainly captured the essence of this remarkable play, and by the end of the performance my emotions were rushing alongside the characters as they prepared for their performance of The Recruiting Officer. The production is convincing, hard-hitting, and witty; whilst a few moments felt slightly jarring, the overall effect was slick and polished. In addition, the lovely staff at North Road Methodist Church provide complimentary refreshments in the interval, making it a wholly enjoyable theatregoing experience.

Our Country’s Good will be playing in North Road Methodist Church at 2:30pm and 8pm on Saturday 16th June.