Roshan Jacob is impressed by BTC’s take on a Shakespeare classic. 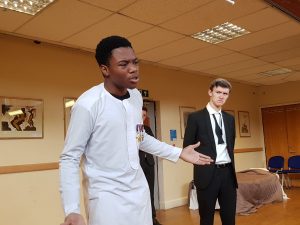 Bailey Theatre Company’s production of Othello presents a brilliant modern reimagining of the play under the gifted direction of Joe Pape. One of Shakespeare’s most famous tragedies, the play charts the journey of Othello, a gifted military commander, and his newlywed, as his life’s destruction is undertaken by the vengeful Iago. This production effortlessly proved the relevance of the Renaissance production to a modern audience, with each character bringing something different to the table with their performances, and making the audience question the delicate issues of racial, gender, and hierarchical equality.

The minimalistic approach of the production ensured that the audience hung on every word the cast uttered. Simple props such as the medals of honour and guns reminded us of the military nature of the play, whilst the appearance of Othello dressed in white revealed his marginalisation from the offset. The effect was a constant reminder of his separation from the rest of the cast, while also suggesting his status as a hero – a status that is challenged by the prejudiced, racist Iago. A minor complaint would be that the signs hung above the theatre space somewhat disturbed the sense of immersion – an issue easily resolved. The sound effects were scarce as well, and whilst this encouraged a focus on the dialogue, its omission rejected the potential of added intensity to already brilliantly blocked and planned scenes.

The blocking is a major asset to the play: Iago was often positioned to the side of the stage, which was a brilliant metaphor for his character, whilst the proxemics between Othello and various other characters – namely his adversary and wife – were brilliant visual cues of the state of his relationship with them. The finale saw the two central characters slumped at the back, which created a picture of defeat, and the juxtaposition of this image with the clearly jubilant Iago stamped the play with a symbol of tragic approval.

The cast is arguably the greatest strength of the carefully constructed masterpiece. Abbah Kel Jackson masterfully steps into the shoes of a tortured Othello, wonderfully exploring his descent into madness as his eloquent speech devolves into broken, harsh monosyllabic curses such as “Blood, blood, blood”. His performance left me feeling a sense of grief for the once magnificent military commander. His adversary, Iago, (John Broadhead) meets and exceeds expectations of what the audience have come to expect from the devilish mastermind. Broadhead was every bit the conniving, merciless vice character as he perched over the shoulder of Othello. Entertaining us with his endless smirks, proclamations, and finally his chilling laughter as the lights switched off, it is this unrepentant stance that truly terrified and unnerved the audience, and left a lasting impression even as the light dimmed and the applause was heard.

Whilst traditional Shakespearean plays aim for heroic melodramatic expressions and gestures, Henrie Allen was a breath of fresh air with her relatively naturalistic performance as Desdemona. Lewis Russell played a suave, charming Cassio; his powerful voice immediately demanded the attention of the audience, a trait shared with Lydia Cook, who played the arguably feminist figure, Emilia. The flirtatious nature of her scene with Iago as she teased him with the napkin added a new layer of vulnerability to her usually staunch character, whilst her passionate declarations of feminist freedom reminded me of Brechtian ideas. Richard Dyer’s Roderigo was brilliant with his gullible mask of confusion and blind obedience. The roles of Brabantio, Lodovico, Montano, and Bianca were equally impressive. In a play oft dominated by Othello and Iago, never have I witnessed a cast so capable of holding their own against the giants of the production. My only criticism would be that at some points, it was hard to see the facial expressions of the characters as they turned away from the audience.

An immense amount of hard work evidently went into the production with a rehearsal time of a mere three weeks. At no moment did the play feel like it dragged – it flew by, with each moment as interesting as the one before. As one who has read and watched other iterations of the play, Pape’s edits were potentially responsible for the easy flow of the play, with the language never feeling cumbersome or misplaced.

Whilst multiple aspects of the play were carried off with aplomb – it was the acting alongside the talented direction that stood out to me as an audience member. If any member of the cast were to be involved in future productions, my attendance would be guaranteed, and there is no higher praise I could possibly award the production.

BTC’s Othello will be playing at Leech Hall, St. John’s College on the 17th and 18th November at 8pm.