As I stepped into the Chapter House in Durham Cathedral, I was struck with an immediate sense of eeriness. Cold, foreboding stone certainly captures Robert Icke’s adaption of the brutalist tragedy that is Aeschylus’ Oresteia. However, one had to wonder how far director Cameron Yule was relying on this ominous setting to carry his production. The cathedral was unashamedly a ‘selling point’ of the show, yet it sadly functions as little more. The echoing stone of the Chapter House inevitably distorts the voices of the actors; in some rare cases, this did add to the overall charm of the production. The brilliantly unnerving rendition of the Beach Boys ‘God Only Knows’ from both actor and speaker alike was certainly a high point in establishing a grotesque sanguinity to the performance. However, this is meaningless when compared to the consistent distortion of spoken word from the actors.

Robert Icke’s adaption is inescapably centred around more contemporary themes of modern religion, war and family; yet he 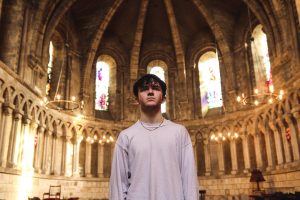 himself has emphasised how it must stay true to the spirit of a Greek tragedy. From the outset, Jack Palmer (Agamemnon), Fionna Monk (Klytemnestra) and Jack Firoozan (Orestes) stand out as excellent performers in upholding Icke’s wish. Frankly, it is their dedication to the cathartic spirit of the script that ultimately manages to carry the performance. Indeed, almost pure, unscripted emotion is what Robert Icke envisioned in an interview about his adaption:

“If the actors feel the real thing in the space, you feel it as well. And, for that reason, I have a kind of—I hope—healthy disrespect for text, because what can make theatre boring is when text is the only active ingredient … Text is so fundamentally a bad, blunt expression of something so much more complex, which is a person”.

Luckily, not only the aforementioned cast members but the cast overalldo manage to capture this ‘lightning bolt’ ethic, although infrequently. There are moments of pure inhuman terror evoked by the cast, which stand out as the epitome of the performance. Equally,the costumes (whilst not ultimately determinative of substance) were subtle and neatly understated. However, there were conspicuous moments when strict adherence to script undoubtedly bled into the performance resulting in a repetition of tired, predictable monologues. Throughout the three-hour performance, this proved somewhat of a challenge to the audience around me in consistently capturing our full attention; particularly during the third act. 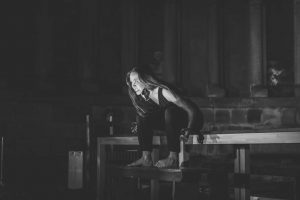 Nevertheless, there is an interesting use of stage-layering utilized by Yule (in true homage to the Robert Icke adaptation); yet it is impossible to fully connect to a play so centred around storytelling and character development when the actor’s backs are turned against the crowd during dialogue. Furthermore, while excessive emotion naturally has its place in such a production; there is a fine balance between sincere, emotive acting, and an obnoxious cacophony of overlapping shouting through which no meaning can be discerned.  This disconnect is compounded by the utter failure to utilise Icke’s desired audience participation on pronouncing the guilt of a character. This could have been an easily organised affair which would have really repaired the audience disconnect, yet it is seemingly skimmed-over in an awkward faux pas.

Ultimately, the performance embodies a sincere yet disappointing adaptation. The spirit of Oresteia and the stellar cast prove themselves to be an excellent arrow. Yet when loosed from its prestigious nock, this talented arrow misses the mark.

Oresteia will be playing in the Chapter House in Durham Cathedral at 7:30pm on Friday 8th and Monday 11th March.