Aadira Parakkat addresses ‘Ophelia is Also Dead’, performing in the Spare Room after its debut at DDF 2019.

Ophelia is Also Dead, written and directed by Aliya Gilmore, is a carefully crafted piece of work offering a voice to one of Shakespeare’s most famous yet silenced heroines. Fionna Monk offers a performance of flawless conviction and carries the play with unswerving mettle. Monk seamlessly moves from the bashful and timid notes of Ophelia’s first encounter with the audience to the bliss of nostalgia of the summer months listening to her mother’s favourite music, and then more jarringly to the long dramatic monologues that vent her deepest frustrations and anxieties. Gilmore’s Ophelia is a 14-year-old girl made to suffer through years of watching versions of herself drown and contribute to the death of her beloved; and all she truly wants is to finally be relieved of the pain.

Gilmore has undoubtedly produced an incredibly clever script where Ophelia, with ruffled hair, mascara running down her cheeks, and smudged lipstick, is constantly plagued by the memories of herself drowning, yet insists on mentioning facts about water and swimming at any chance she gets. Gilmore uses the refrain, “Did you know that water at a certain speed turns to concrete?” to remind the audience of the obsession that lies beneath Ophelia’s torment. The swimming goggles that her 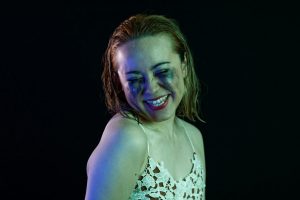 mother’s ghost gifts her in the first half of the play add to that wonderful irony. And in a play of such irony and intertextual references, Monk never loses the attention of the audience; every so often, she makes eye contact with you, intensifying the effects of a broken fourth wall.

It is this connection that allows the play to be as effective and impactful as it is; Ophelia regularly blames the audience for her plight, notably in one of my favourite lines in the play: “Half-gods accept wine and water. Audiences need blood.” In our conversation with a silenced heroine, the audience experiences a piercing sense of guilt and sympathy. Monk’s desperation as she cries, “You did this to me!” followed by a powerful silence creates a palpable tension amongst the audience that is thoroughly transfixed and invested in Gilmore’s world.

The staging is meticulous; I particularly enjoyed when Ophelia narrates her fantasies about starting a family with Hamlet and what that would be like, as freeze frames of family portraits stand behind her, shifting every time she turns to look. The blocking of the stage allows Ophelia’s narrative to literally take up the spotlight, but the audience is still made to feel the sense of the possibilities that were robbed from her. Additionally, the placing of her as a narrator intruding on scenes from the original material and adding recitations of her own memories is functionally selective. In parts I found myself wondering how Monk was able to perform these lengthy lines that ran like poetry without breaking a sweat or fumbling.

The quality of performances by the supporting characters were also incredible; Alexander Cohen portraying a playful Horatio was particularly notable, and even more so was his rendition of Horatio’s imitation of Hamlet. Aaron Rozanski’s portrayal of Hamlet in Gilmore’s rewriting of him as a character misunderstood was quite impactful as well, especially in the scene at the end where he embraces Ophelia in an emotional farewell. Joe Pape’s portrayal of Laertes as a loving older brother is delightful and adds an endearing sentimentality to his relationship with Ophelia. It is also important to note that the chemistry between the each of the performers added to the conviction of their performances; Ophelia and Hamlet’s unfulfilled adoration for each other, her playful relationship with Horatio, and her authentic sibling bond with Laertes.

Overall, Gilmore’s writing and direction produces a powerful play that is ambitious in more ways than one. Ophelia is Also Dea ’s numerous tonal shifts and interwoven dynamics make it a complex and layered production, but its narration never loses momentum and is staged with an exemplary level of professionalism. It was a delight to watch and be immersed into a world where one of the biggest injustices to a character in literary history is addressed and satisfyingly resolved, and it was a pleasure to witness Aliya Gilmore and Fionna Monk’s blinding talent. The play left me leaving The Spare Room with an overwhelming sensation of resolution and fulfillment at experiencing an ambitious retelling perfectly done.