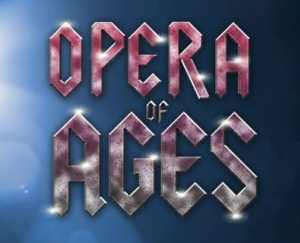 Coming off the back of a brilliant production of Alice’s Adventures in Wonderland in Easter term last year, Durham Opera Ensemble have proved just how versatile they can be with the wonderfully absurd Opera of Ages, their annual Michaelmas showcase, staged in the historic Castle Great Hall. The cast was divided into two opposing sides – a Rock chorus and an Opera chorus – and they performed a mashup of Classic Opera and Classic Rock, based around a loose story. The brainchild of director Ava Merrell and musical director Josh Ridley, this production did not seem like it should have worked. However, I found myself increasingly being drawn into its weird world as the night went on.

Considering I was already sceptical about Opera of Ages, the rock remix overture – taken from Mozart’s The Marriage of Figaro – was not, perhaps, the best start. I found it too restrained with its Rock elements to properly set the tone for the rest of the night. The Rock songs in general were weaker than the Opera ones, but this is almost to be expected, as DOE are, after all, an Opera Ensemble. This did not mean that the Rock songs were bad (they were entertainingly performed throughout) – they just seemed to be in the constant shadow of the Opera scenes.

Despite this, in the moments DOE got it right, they really hit the ball out of the park. A few particular moments stand out to me as being particularly effective. One of these was ‘Summertime’ – performed by Rowena Ashby and Victoria Schickoff – where their beautiful vocals resonated throughout the hall as the audience was bathed in warm, yellow light: a fantastic technical decision. Another great moment was Gershwin’s ‘It Ain’t Necessarily So’, with Cameron Gergett soaring in lead, supported by the effervescent chorus. Speaking of the chorus, they were the real bedrock of the show, providing the bridge between the Opera and Rock elements, and underpinning the entire ‘Rockpra’ idea that the creators were trying to convey.

Opera of Ages excelled at transitions into and between numbers. A comedic interplay between a rock guitarist teaching an opera singer to play guitar managed to flow expertly into a rip-roaring rendition of ‘Highway to Hell’ – one of the best rock songs of the night. Perhaps my favourite moment of the night was the slow entrance of the opera chorus from the back of the hall, in a haunting rendition of Phillip Glass’s ‘Two Lovers Sat on a Park Bench’, which then snapped into Mozart better than I had thought seemed possible. The ability and flexibility of the band definitely helped with this, providing sharp contrasts in areas where it was most needed.

I found the choreography more Camp Rock than Freddie Mercury at times, but this seemed to suit the self-referential comedy the show was going for. This was also reflected in the choice of outfits, which played to the stereotypes of both Opera and Rock. It seemed like the directors were highly aware of the fact that this was a rather ridiculous concept and ran with it – which certainly worked in the production’s favour. One of the only glaring issues with the opera was the balance between parts at times, meaning that occasionally it was a struggle to hear the soloists. The venue itself was perfect for this performance, having the right acoustics for both the classical and the heavy elements.

In Opera of Ages Durham Opera Ensemble have shown themselves to be one of Durham’s most flexible performance groups, and have showcased some of Durham’s best vocalists, most skilled instrumentalists, and an obviously dedicated production team. I can only hope that this is a good sign for the rest of this year and that they will continue to keep getting better and better.