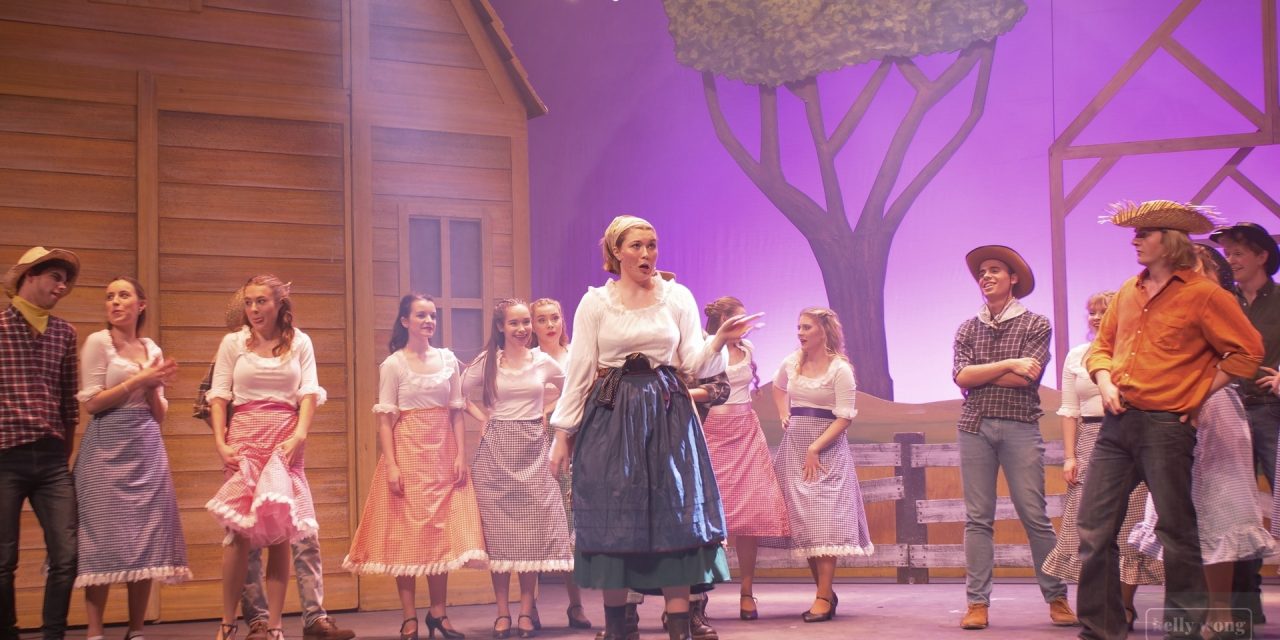 DULOG transported the Gala Theatre in rainy Durham to the sun-kissed fields of Oklahoma with their feel-good cowboy classic, directed by Francesca Davies-Cáceres. The famous musical was bound to be a hit, with the audience already bopping and swaying as the overture soared through the venue. As the curtain rose, an idyllic image of rural America appeared. The set design was impressive and its versatility greatly aided the storytelling and immersed the audience fully. Special mention should certainly go to stage management, headed by William Hewitt, who enabled swift and smooth transitions from scene to scene throughout the production.

The cast were sensational. Not only were the lead actors impressive, but the ensemble really heightened the calibre of the show, with each cast member consistently engaged and present. The big numbers were fun, slick and exciting. The female ensemble particularly stood out, with the number ‘Many a New Day’ being a surprisingly poignant display of solidarity between the women on stage. At times however, it did feel as though some of the earlier choral numbers were in need of more energy. That being said, as the show progressed, the cast really began to hit their stride. The dance ensemble tackled several challenging, impressive numbers, particularly the ‘Dream Ballet’ choreographed by Gabriella Sills and led skilfully by Martha Wrench as Ballet Laurey. Kane Taylor in the role of Will Parker also impressed with his dungaree clad tap dancing during ‘Kansas City’. Sills’ choreography throughout the production was exemplary, and added character and professionalism to the show without being distracting or overly kitsch.

The stand out performance of the show for me came from Rose Galbraith as Ado Annie, who perfectly encapsulated the cheeky, pouty and ditzy character, having the audience constantly laughing. Her performance paired with Tom Cain’s hilarious Ali Hakim was a treat. Mark Woods as Curly alongside Ralph Skan’s Jud Fry also worked well together, with some particularly strong vocals on ‘Jud is Dead’. However, the singing here was hindered by some awkward blocking, with Skan confined to a small corner of the truck, trapped by a seemingly unneeded table, allowing for little movement and poor sightlines. Despite this, both actors still gave a great performance in this scene and throughout the show. Aunt Eller was portrayed by Honor Halford-Macleod, who gave life and zeal to her funny, lovable character. Her characterisation was charming, developing sweet, believable relationships with everyone. At times her accent overtook her and made it difficult to hear what was being said with a loss of diction, something which affected a number of the actors. Overall however, the cast were able to convincingly maintain their southern, cowboy tones.

Richard Rodgers makes a point in his original score to bring out the most decisive moments of the story by use of the full orchestra. From the depths of despair found in ‘Lonely Room’, to the joyful optimism in ‘Oklahoma!’, the band led by Gina Martin and Matthew Bartlett perfectly encapsulated the emotion of the music, as well as maintaining a good balance with the singers. With Oklahoma! being one of the original ‘lyrics-first’ productions, its music is rooted in storytelling, a concept which Martin and Bartlett’s band mastered. This, alongside the powerful vocals of Elysia Boyle as Laurey, made for compelling listening.

Overall, DULOG’s production of Oklahoma! was uplifting, fun and a joy to watch. The cast worked well together and it is evident that a lot of hard work has gone into the production, from the slick dance numbers to the fantastic harmonies throughout. It is a production not to miss, especially to witness Miriam Templeman’s hilarious cackling as Gertie, a sound that is difficult to forget. Davies-Cáceres and her team have created a joyful show, which the cast and crew should be very proud of.

Oklahoma! will be playing at the Gala Theatre on 22nd-25th January.