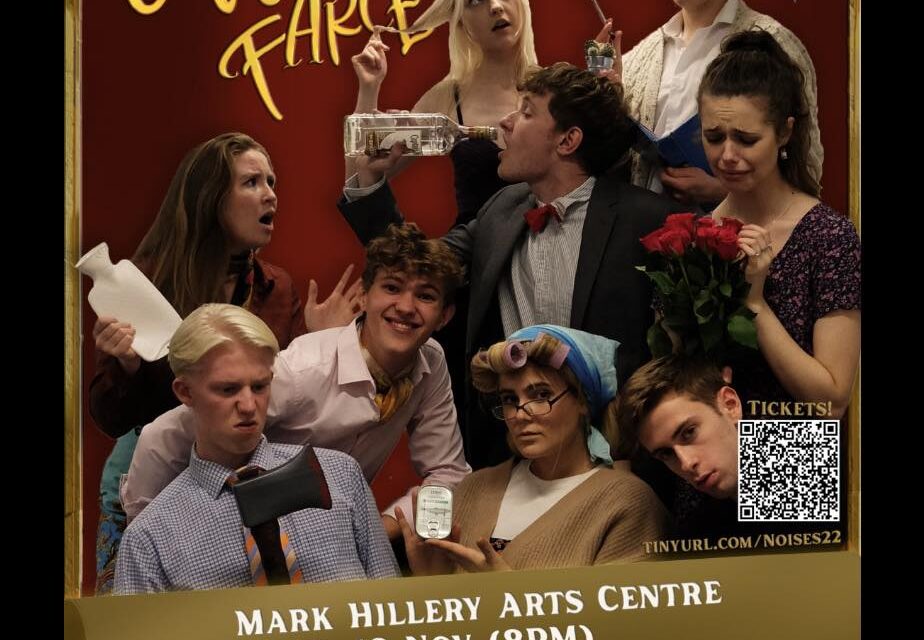 Entering Collingwood, I didn’t expect to be harassed by a senior citizen perusing that night’s raffle.

“Rapple? Rapple??” I was almost let down to realise this was no senior citizen but Olly Stanton, playing the indeterminably squiffy Selsdon. Nevertheless energised, I was excited that the entertainment had started so early.

Noises Off is Phoenix Theatre Company’s latest farce about… well, a farce. It has all you might ever need in flowing abundance: doors, sex maniacs, directorial interjections, doors. In fact, the brilliantly constructed set (to the credits of Rosie Haffenden, Carrie Cheung, and Katie Scott) has more liminal doors than Monsters Inc. In the words of the endearingly ditzy Brooke (played well by Emilia Lewis): “All these doors!” The first thing I thought was, uh oh, the set’s falling apart! The next thing I thought was, this is hilarious, the set’s falling apart! As the action of the farce-farce sets apace and relations unravel, so too does the set, creaking under the enormous strain of the squabbling and physical comedy it facilitates.

Equally enormous is the talent of the cast. For a play that has been in the works for 9 months, described by director Ben Cawood as his ‘baby’, the cast were relatively new. But it’s no easy feat for a student production to have you caught up in the interior dramas of the play as though they had really been there along, bubbling away for months and months on end. The thing is, the farce has some genuinely tense and arresting moments (Ben Lewis does a great job of setting them up and drawing them out as Lloyd), leaving the audience with the fading echo of their near constant laughter and the A/C whirr. To their credit, the cast know when to give the audience the laughs they want, but equally, they know when to withhold them, like a naughty dominatrix.

The revolving comedy (a literal round-and-round affair with incessant coming-and-going, and not to mention the set around which the audience themselves revolve) produces some classic slapstick moments. Hilarious and consistently inconsistent performances are delivered by the likes of Mrs. Clackett (Maddie Clark), who’s cackle is guaranteed to reverberate in your skull the remainder of the night.

A resounding success, the show is a refreshing addition to the Durham circuit. For a show so concerned with the backstage logistics of stagecraft, the skill and dedication of the creative and production team can’t be stressed enough. In addition to those already mentioned, additional deserved recognition goes to the assistant director (Emily Lipscombe), production manager (Rhiannon Morgan), stage manager (Rachel Wilkinson), and producer (Joyanne Chan), their support team, and the rest of the cast.