Christie Clark is uplifted by the first performance of the Durham Revue 2017-18 troupe. 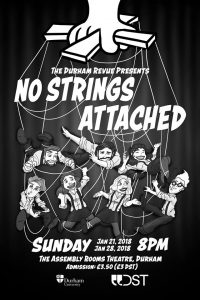 Attending No Strings Attached was undoubtedly one of the most enjoyable and uplifting nights out that I’ve had so far this year.

The Durham Revue are a well established and highly esteemed sketch comedy troupe so I’ll readily admit that I went in to this show, the first show of theirs that I’ve seen in my three years at Durham, with very high expectations. I am delighted to say that I left the Assembly Rooms Theatre last night feeling more fulfilled and uplifted than I had ever expected to be.

With colorful LEDs lining the sides and top of the stage, and blaring dance music greeting those entering the theatre, all of us present knew we were in for a real spectacle. The energy in the room was palpable long before anyone set foot onstage, which is a real testament to the creative vision of technicians Tom Poon and Helena Trebichavska, and the entire Durham Revue itself. I have never before been immersed in a space that felt as supportive and encouraging and accepting as the Assembly Rooms Theatre did last night. Whether the performers tripped over their lines, forgot a prop, or simply couldn’t keep a straight face, the reaction from the audience was always positive and I found the entire experience of watching the Revue perform really uplifting, as the positive aura within the space showed how beneficial performance art can be for people.

The confidence and strength that the Revue presented to the audience from the first moment they introduced themselves was unique and something that you truly need to encounter to understand. With years of experience behind them, and the weight of expectation upon their shoulders, the entire troupe seemed supremely confident and comfortable whilst onstage and each of them took control of the space and captivated the audience with aplomb.

Of course, some of the sketches were stronger than others. As is the nature of sketch comedy there were hits and misses. I personally found the simplest pieces to be the most effective with ‘Patricia and the Wolf’ being my personal favourite. The wide scope of sketches on offer really showed off the versatility and skill of the troupe and I found that the pieces concerning their writer Sam Fenn did manage to link the evening’s title with what was being presented, though I’ll admit to not enjoying those sketches as much as others.

I do think that you could tell which were the more experienced members of the troupe simply because they seemed slightly more at ease than the new members, but that, by no means, means that anyone was anything less than amazing. Rosie Minnitt’s performance in the ‘Guess Who?’ sketch really struck a chord with me and I really enjoyed and actually managed to understand the economics that Lydia Cook explained in the piece about ‘El Dorado’. Charlie Billingham and Hamish Lloyd Barns’ piece about ‘Harry Potter’ was an early big laugh for me, and there simply aren’t words to convey what I want to convey about Lloyd Barn’s portrayal of ‘Simon’. The moment Lily Edwards appeared out of the trapdoor was a perfect example of how well this team know what they are doing, and I have to say that the onstage chemistry between Tristan Robinson and Luke Maskell was phenomenal. Robinson’s face throughout every scene, even those he was just in the back of, was always wonderful, and I have to say that the physicality and vocal skill displayed by Maskell throughout the night made him the standout performer by far.

I thoroughly enjoyed seeing the Durham Revue perform last night. If you’re feeling down about the weather, stressed out because of summatives, or glum about your dissertationl then I highly recommend just taking a night off from work, popping down to the Assembly Rooms Theatre next Sunday and spending an hour watching No Strings Attached. There are few things more pleasurable than seeing people do what they love and do it well, and being in the presence of the Durham Revue offers that in spades. It was a wonderful experience and extremely good value for money, so I suggest that you make the effort to go. There is only one more performance, so see it while you can – I might just see you there myself.

No Strings Attached will be playing again in The Assembly Rooms Theatre on the 28th February at 8pm.