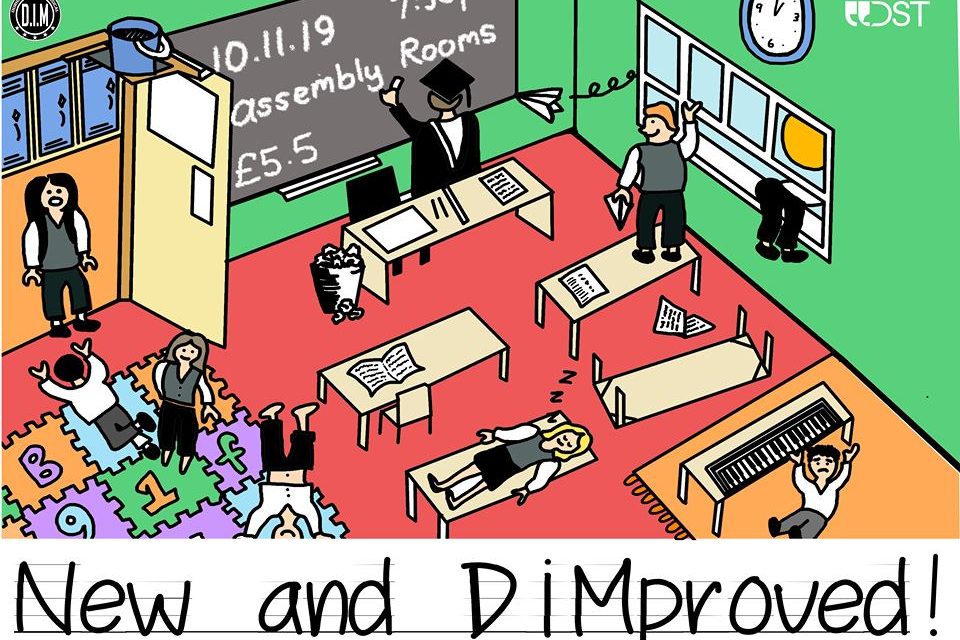 Natasha Ali is throughly entertained by the hilarious first show with the new Durham Improvised Musical troupe, New and DIMproved.

This was a much-anticipated night for Durham Improvised Musical (DIM). A new year with a new troupe in a near-new venue. They generated an impressive crowd, and collected some beyond random suggestions. The only real question was – would they be able to live up to the DIM troupe that made it to the Edinburgh Fringe last year?

The answer to that is yes. A thousand times yes.

To be clear, this wasn’t a perfect DIM show. The story was all over the place at first. A Weetabix factory is definitely not the most relatable setting to deal with and the cast did struggle for the first few minutes to establish any proper plot points.

But then Charlie Nicholson and Tom Murray entered the scene and everything, everything changed. They weren’t funny because their characters were cereal or because they slammed themselves on the floor multiple times (which I really hope they didn’t hurt themselves doing). They were funny, downright hilarious, because of how well they worked off each other. They followed the rules of improv, said yes to whatever was suggested and because of it they made each other better. They weren’t afraid to look stupid and it led to some pretty clever lines and songs. I wouldn’t be against seeing a spin off series of James and Cheerio infiltrating cereal companies, pranking the world one breakfast at a time.

Ralph Skan shined, as always. As the new President of the troupe, he did well to keep the story going and pull a laugh from the audience whenever he could. Florence Russell had a brilliant villain solo towards the end that showcased her talent for on the spot lyrics. I don’t think I’ll ever be able to un-see Mark Woods rapping on stage and his intensity for bad hygiene, while repetitive, was very funny to watch.

A special mention goes out to Angus Shennan. I don’t normally notice the music in these kinds of things but throughout the show the piano sounded pretty awesome. There was a wide variety of genres and rhythms and while I’m not the most qualified person to talk about music, I genuinely think he stood out within the troupe.

As for the actual story, it did all come together in the end. Everything got wrapped up eventually, which is more than I can say for some DIM shows I’ve seen. It’s fun to watch a group of actors have fun on stage. They looked like they were having an absolute blast and I’m glad I was there to experience it.

At the end of the day, it’s the middle of term. Everyone’s a little down and a little lost and a little out of sorts. Stressed. But for an hour at least, DIM provided a stupidly entertaining ride.

And really, isn’t that enough?