REVIEW: My Very Own Story

Prior to this evening, I had very little knowledge of ‘My Very Own Story’ and knew only that it was a play with three individual plots. Combining this with the notoriously tricky venue of Caedmon Hall, and a production team, cast and crew exclusively comprised exclusively of freshers, I was not sure what to expect. This year’s DST Freshers’ Play, written by Alan Ayckbourn, comprised of a show (or three) within a show, after three storytellers are triple booked in a venue. Each storyteller told their story, before each of them joined in and continued with the latter’s play.  While it wasn’t an especially ground-breaking piece of theatre, it was a thoroughly entertaining light-hearted show, which shows a lot of potential for DST newcomers. 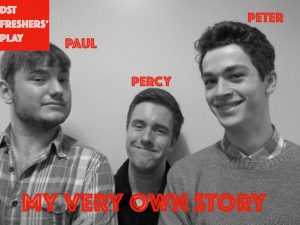 Before the curtains opened, we were greeted by music from pianist Jude Wegerer, which transitioned into a brief overture to begin the play. Music was used in some scenes effectively, although it was an asset I feel was underused. The opening dialogues felt a little stilted, and it took a few minutes for the cast to really warm into their roles, but an early scene with the three leading men showed snappy pacing and intuitive blocking from director Brandon St C. It was clear from the outset that the directorial team had experience, and they produced some lovely moments on stage, fully utilising the breadth of the performance space.  I only feel this was let down by some lack of confidence in lines at times, perhaps down to first night nerves. I look forward to seeing more of Brandon’s work in the future, as he handled this challenging script with ease, along with assistant director Amber Covington.

The show was held together by trio Percy, Paul and Peter, played by Jacob Freda, Will Allen and Thomas Mullen respectively. The three actors carried a lot of the dialogue and held responsibility for the pacing of the show. At times, pacing did lag, especially at the beginning of the second act, however it was restored for the finale.  Allen shone in his role and commanded the stage with comic timing and apt reactions to the on-stage action. Of the trio of storytellers, he stood out as the strongest, especially when working within Percy’s story. The characters of Peter and Percy initially played second fiddle to Allen as Paul, but Jacob Freda and Thomas Mullen really did warm into their roles, with Mullen stealing the show towards the end with his portrayal of the sorcerer. The supporting members of the cast had moments of brilliance, especially Ellie Fidler as overbearing mother Alicia, however generally, I felt that many of the acting choices felt a little on the nose and at times immature, particularly within Peter’s story. This is something that I am sure will improve with time and experience, and despite this, the ensemble shows promise and worked cohesively.

I was impressed with the use of lighting to differentiate between the different stories, with nice use of colours and washes from the technical team, headed up by Adam Carruthers. Strobe lighting and other effects worked nicely to match the bold and sometimes wacky characters within the show. In addition to this, there appeared to be very few technical hiccups, often associated with opening night, and for this I command the crew! It was unfortunate that the storyteller’s chair was not always lit when needed, which did detract a little, but this was only a minor critique.

Although minimal, props and costumes were used effectively to add to the action on stage, and I particularly enjoyed the creation of a cart with a wheelchair.  Special mention must also go to the most energetic stage hands ever, who practically sprinted on and off stage to retrieve furniture!

What I enjoyed most about the production, was that it never took itself too seriously, and I was able to laugh at what was simply, a silly fun play. All the performers threw themselves into it, and while these choices didn’t always land, it was lovely to see people taking these risks. I only hope that the team are rewarded for their efforts with a larger audience, as it is clear they have all worked hard on the show, and I wish them the best of luck for the rest of their run.

My Very Own Story will be playing in Caedmon Hall at 7:30pm on Friday 9th and Saturday 10th November.