Jamie Blackwell escapes from the storm to be charmed by Feather Theatre Company’s musical. 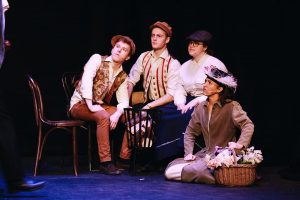 Escaping the blistering cold and wintery storm that has beset the streets of Durham, I found myself immersed in the streets of London watching Feather Theatre Company’s My Fair Lady, an iconic musical based on George Bernard Shaw’s much-loved play. Following the tale of a young flower-girl’s transformation from street urchin to a well-spoken and sophisticated ‘lady’, the story tracks a wealth of themes from love, class conflict, patriarchal subversion and, most prominently, phonetic lessons. FTC should be decidedly proud of their production which was reliably amusing, displaying instances of great energy and vitality. While the near three hour run time left moments of dialogue that unfortunately felt rather flat, the performance was overall highly enjoyable.

My immediate commendation must fall to the band that provided such high-quality music throughout the evening. Hector Halford-Macloed masterfully conducted the vibrant and talented orchestra which visibly lifted the action occurring on the stage. Here, too, both Macloed and Izzy Ardon should be praised for the quality of the chorus singing, particularly in moments of harmonised quartet, which was slick and well drilled, frequently benefitting from the sheer size of the cast itself.

The performances on stage were pleasant and moments of vivacious atmosphere brought a warming air to the auditorium. Unfortunately, specific character development occasionally felt uncertain and extemporised. Certain moments of interplay, often between the trio of Higgins, Eliza and the Colonel, lacked the effervescent and spirited tone a musical of this attitude requires. 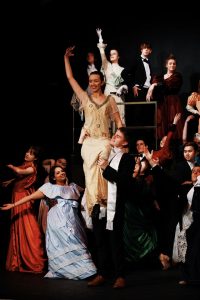 Nevertheless, Nicholas Tansley’s imperious depiction of Henry Higgins was outstanding. Finding his feet after an initially hesitant entrance, he commanded the stage with an enchanting balance of arrogance, disdainfulness, and sarcasm. While I would like to have seen a touch more vulnerability during his final character arc, Nicholas’ confident stage presence endured the whole show and was a welcome demeanour to carry the audience through the evening. I was also impressed by both Jemima Oakey (Mrs Pearce) and Alice Swann (Mrs Higgins) who captured the restrained confidence that their characters demanded, regularly offering a delightful juxtaposition to Higgins’ unrestrained anguish and flamboyancy.

Olivia Nicole Kittle offered a pleasing illustration of Eliza Doolittle. Her singing was strong, suiting the role she portrayed, although at points her accent, whichever it may have been, was slightly inconsistent, particularly during her musical numbers. I was also fond of her teasing innocence that offered such a successfully comedic introduction to her character. However, her character lacked the fiery attitude that Eliza’s personality dictates a necessity for. This left moments where she might have portrayed an imposing figure in an overwhelming male-dominated show, such as during her interactions with Freddy, feeling tentative and stilted.

Both George Bone and Lewis Russell provided convincing and frequently delightful depictions of Pickering and Freddy respectively. Russell particularly impressed with On the Street Where You Live, bringing charm and charisma to a beloved number. I admire the decisions made by both director Lauren Spowart and her assistant, Sam Draisey, in taking Freddy’s character in a more hapless, amorous direction, although personally I would like to have been more convinced of this attribute, especially during such scenes like Show Me between Eliza and Freddy.

For me the highlight of the show was brought about by Angus Shennan, Alexander Best and Jonny Hewitt playing the trio of Alfred Doolittle and his animated companions. The energy they effectuated upon the stage was intoxicating and their vibrant rendition of With a Little Bit of Luck forged a new vitality into the evening’s performance.

Megan O’Callaghan and Caitlin Little as choreographer and assistant choreographer succeeded in painting instances of lively grandeur with their movement direction, notably the exuberance during Get Me to the Church on Time and the elegant setting of the waltz in the first act. Despite this, the magnitude of the cast size frequently saw the dances plagued by inaccuracies and scrappiness, highlighting the congested nature of the stage when occupied by a rather oversized ensemble.

Honourable mentions should go to Shannon Moxey and Issy Richardson, and indeed the entirety of the technical team, who fiercely denied the traditional host of issues that typically bedevil first night shows in Assembly Rooms by producing a well-balanced and technically effective show, only somewhat hampered momentarily by infrequent microphone difficulties.

Costume and set was appropriately utilised and sensitively designed with transitions between scenes typically smooth and unobtrusive to the performance. My only slight contention was that during On the Street Where You Live the stage felt rather bare and empty, a problem that was later fixed for the second act.

Decidedly entertaining and a light-hearted way to escape the horrors of snow and ice that lie outside, I would highly recommend seeing FTC’s take on such a cherished musical. I guarantee you will leave the theatre warmed and smiling.

My Fair Lady will be playing in the Assembly Rooms Theatre at 7:30pm on the 2nd and 3rd March.