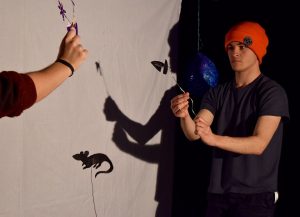 Upon entering the Assembly Rooms Theatre, we were greeted by vintage sci-fi posters, finger paintings and a stage decorated with brightly coloured space images. This charming scene propelled us into an atmosphere of childlike wonder and prepared us for what was going to be a very unique and special experience. From the start, the sheer physical and comedic talent of all actors was apparent. The short, mostly wordless sketches had clear and delightful stories, told purely through the clowns’ and puppet’s physicality, and they rarely failed to produce laughter. There was such diversity in comedy and sketches, using sound effects, puppets, and costumes. Some highlights were scenes surrounding a scarf puppet’s relationship with a troll, beautifully choreographed shadow puppetry, and space exploration. This was a night to remember for all the right reasons.

The standout moments were the group scenes. The entire ensemble, puppeteers included, worked seamlessly together. They interacted harmoniously with such playful joy; it was clear both audience and actors were really enjoying themselves. Much praise must go to writer and director Jasmine Price, whose vision and execution were so aesthetically pleasing that every scene had the audience smiling. 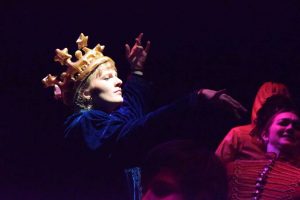 Despite the incredibly strong cast there were a few standout performances: Charlie Norton’s range of physicality and facial expression proved she is a wonderful performer. She constantly drew the audience’s attention, even when competing with seven other actors on stage. Similar praise must go to Patrick Palmer and Barney Mercer, both of whom had simply flawless comic timing.

I must not forget the puppeteers, Ashaleigh Hall and Imogen Carr, who beautifully manoeuvred the puppet, giving it an endearing yet sassy personality. Impressively, they frequently allowed you to forget there were people controlling it at all. They should, however, be careful not to over-act with their facial expressions, as this occasionally drew attention away from the puppet’s own movement. Similarly, for the clowns, it should be advised to maintain physicality and character when entering the wings so as not break the wonderful childlike illusion. 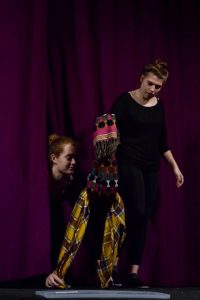 To address a minor gripe: there were some scenes which occasionally dragged either due to a repeated joke or a lack of visual punchline, making the play feel slightly too long. That said, the ending and final group scenes picked up the pace and energy leaving the audience mesmerized.

When the cast is so compelling and funny that any audience interaction was not met with the usual British awkwardness but true engagement and joy, you know it’s a night you’d be sad to miss.

MOSCOS will be playing in the Assembly Rooms Theatre at 7:30pm on the 8th and 9th December, with an additional matinée performance on the Saturday at 2:30pm.