For three nights, Lion Theatre Company has transformed local club Wiff Waff into Ezra’s Atlantic, a seedy Soho nightclub in the summer of 1958. Mojo is a lightning-fast production which does not allow its audience to lose focus for a moment, a harrowing performance that invites laughter one minute and leaves you shivering the next.

Director George Chilvers makes creative use of an actual nightclub for this production, an example of site-specific theatre at its best; not only was ID required for entry (Wiff Waff is a club with a licensed bar, after all), but keeping the bar open upstairs before the show and during the interval really set the play in its right context. With its bare walls, stone flooring and metallic lights and railings, Wiff Waff lends itself easily to the aesthetic of the play, matching the cuffed trousers, open-neck shirts and leather shoes of the actors’ costumes.

The performance space itself is downstairs, a small stage area surrounded by chairs on all four sides with two entrances, such that the audience could not get any closer to the action. The cast respond well to this, working easily in the round such that no audience member feels disadvantaged; rather, we are very much the flies on the wall, the mute observers of the unfolding horror experienced by six characters. The high-intensity, electric atmosphere of the play feels totally real – those sitting in the front row will find the actors just a few inches away from them.

‘Electric’ is the best word to describe Mojo; the dialogue is fast, the movements slick and the lighting and sound sharp. Even the scene changes, under blackouts with 1950s rock ’n’ roll playing, are high-energy as the actors move chairs, scatter 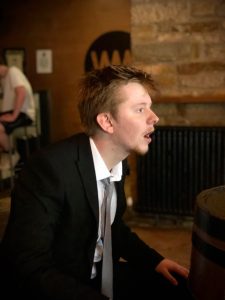 rope across the floor and burst into life the second the lights come up. Despite this pace, the characters remain distinct; Charlie Billingham and Joe Pape make a neat double act as Potts and Sweets, bouncing easily off each other in the opening scenes. Charlie Nicholson is a perfect foil as the neurotic Skinny, alongside Jack Whitmore’s authoritative yet vulnerable Mickey. Owen Kennedy makes a briefer appearance as Silver Jonny, but his performance is nevertheless a compelling element of what is already a watertight cast. Ned Campbell’s performance as Baby borders on the hypnotic, his dazed, drugged portrayal alternating between hilarious and frightening.

Occasionally, the fast-paced nature of Mojo makes it a little hard to follow – it is easy to lose track of the broader context of the play and enjoy it for its individual moments rather than overarching storyline. The actors are compelling and fluent but for this reason there is a risk of the audience getting lost in the lines and not following the thread of conversation; this is not a play for the passive viewer. Having been dropped into this world of amphetamines, nightclubs and gang raids so quickly, the audience has to learn quickly to understand the plot.

Jez Butterworth’s script was ground breaking upon its first performance in 1995, and has lost none of its charm today – the cast and production team use the text to its full capacity, creating moments of comedy spliced through hysterical terror. Not many plays have the audience laughing uproariously one moment and gasping a few seconds later. Mojois fascinating, harrowing and urgent; it makes for compelling viewing.

Mojo will be playing in Wiff Waff at 7:30pm on Wednesday 12th and Thursday 13th June.