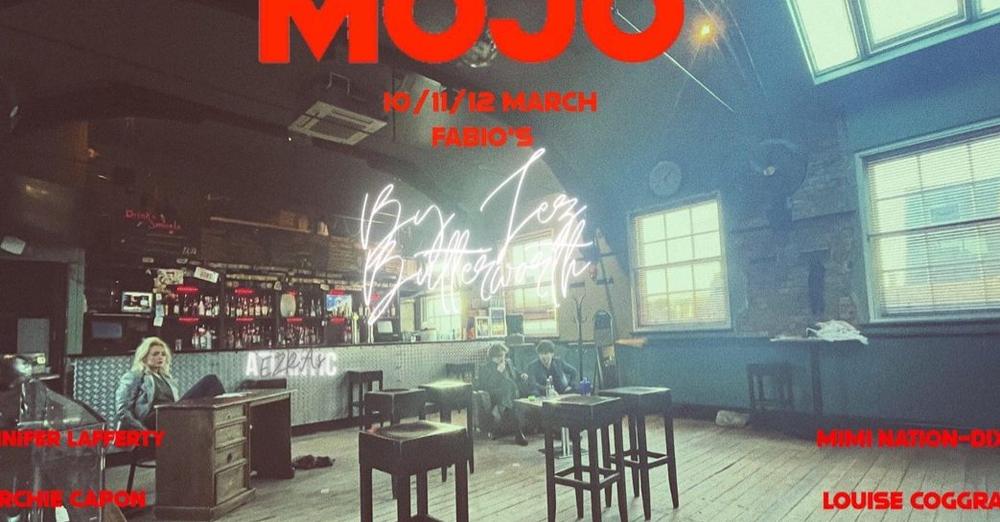 Tez Butterworth’s ‘Mojo’, a comedic farce come dark drama, tells the story of Soho’s Atlantic Club in the late 1950s. The future of the club lies on performer Silver Johnny’s back as dangerous events unfold; soon boss man Mickey is attempting to regain control with he, Baby, Sweets, Potts, and Skinny barricaded in the club. As delicate balances of power begin to shift, new sides to characters are revealed and emotions intensify.

Pitch Productions’ version takes the audience on a veritable rollercoaster ride, with a visceral atmosphere of slick 50s coolness. From the innovative set design to the catchy soundtrack, the audience is transported into a drug-fuelled danger zone.

Every inch of Fabio’s Bar is utilized by the cast, with the aisle in the middle of the audience and the upper balcony becoming major factors in creating tension. This was also accompanied at times by dynamic lighting choices to illuminate key moments, which I would have loved to have seen even more of throughout the production.

It is easy to tell that the play is a collaborative effort, with Jennifer Lafferty as Executive Director and the rest of the cast as Associate Directors. Each actor aided each other in the creative process, evident in the impeccable comedic timing and relationships forged between each of the characters. This form of rehearsal is something other theatre companies within DST could attempt – the lack of a concrete director allows for this cast to merge together as a whole.

Another refreshing concept for DST is the inclusion of mini character trailers along with one main trailer as promotion for the production. These were edited by Kit Redding, along with many sophisticated posters by Louise Coggrave, adding yet another collaborative element to the play. However, it was the tremendous skill and pacing of the acting that was the real highlight of this production.

For me the standout performance came with Mimi Nation-Dixon’s portrayal of Baby; she combines an explosive energy with a beautiful fragility. The audience almost sees the cogs turning behind her eyes as we view Baby’s story through her lens. Hers is a truly masterful display of emotion.

Coggrave also commands authority in her challenging role as big boss Mickey. She perfectly encapsulates the masculine energy required, something I would love to see her reprise in future productions with even more rigour.

Redding charms the audience with his endearing performance as Sweets. True to his name, he brings a bumbling sweetness to the role, a perfect partner to the somewhat level-headed Potts. His comedic timing is effortless, definitely receiving the most laughs from the audience with quips such as “there’s got to be rules, and that’s a rule”. His chemistry with Potts, played by Archie Capon, results in hilarious drugged-up banter – these two could almost have a play of their own. The sureness of Capon’s movement as Potts, coupled with his swift changes in emotion, create a truly dynamic character; the audience hangs on his every word.

A relatively new face to DST, James Roberts’ portrayal of the obnoxious Skinny seems to intensify in nervous energy throughout the play, capturing the minds of the audience. Although this at times falls slightly flat, his and Nation-Dixon’s sizzling chemistry remains to put us on the edge of our seat.

Although fleeting, Lafferty’s appearances as Silver Johnny reinforce the cool nightclub atmosphere of the play. She, Nation-Dixon, and Coggrave each nail the nuance required to play originally male roles whilst maintaining he/him pronouns, giving new meaning to the prevalent theme of masculinity in the script.

Mojo is, simply put, a must see; a truly incredible display of some of DST’s best collaborative efforts. Rumour has it tickets are already sold out for Saturday, so if you want to see this stellar production I’d grab a ticket now (while the fish are still jumping).

MOJO is playing at Fabio’s Bar until Saturday 12th March