The nature of any Miscast production is simple – anyone who doesn’t fit the demographic for a role in a particular show, usually due to race, gender, or age, performs a piece written for that particular role. Such performances can provide anything from lighthearted comedy to biting social commentary and a fresh perspective on roles we thought we had long since exhausted with analysis. One such performance was put on by Sightline Productions at Caedmon Hall on  November 11th, to great success. 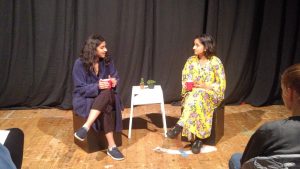 The set was simple enough – an empty stage in which the cast performed a mixture of monologues and dialogues from their chosen plays. The selected pieces were a solid mix of older and contemporary, funny and serious; though I was at one point left wondering if four Shakespeare pieces, two being from the same play, was truly necessary, when one of those slots could perhaps have been filled by an older piece from a different writer for the sake of variety. It also appeared that little thought had gone into the running order; though oscillating well between older and newer plays, there was at points a bizarre dissonance as the tone shifted rapidly from one piece to another; most notably, in the shift from a serious and soulful Angels in America dialogue into Mabel Chiltern’s comedic proposal speech in An Ideal Husband. However, none of these criticisms detracted from the quality of the performances themselves.

Though everyone involved delivered their pieces well, there were a handful of standout performers. Auguste Volton, who first portrayed Othello’s Emilia, followed by ‘Tis Pity She’s a Whore’s aptly named Putana, and finally The History Boys’ Hector, gave a stellar performance in all three roles. His Emilia languished with a glass of wine in her hand as she lamented the ways of men with an acerbic wit and a sense of feminine wisdom that retained its authenticity when it was undercut with seeming exhaustion. In this role, he managed to be funny – the wine, the languishing – without detracting from the emotional side of the piece, in which we come to see Emilia as a longtime victim of mistreatment at the hands of men. The subtlety he demonstrated even in such a short space of time is a testament to his skills as an actor. He gave even more humorous performances first as Putana, couched in a canary-yellow dressing gown and stomping his feet, and then Hector, in an ensemble piece that was brilliantly delivered all round. Overall, he demonstrated the subtlety and versatility that are key to any successful Miscast performance.

Yet another standout performance was given by Eleanor Hawkins as Joe, a closeted and deeply troubled Reaganite from 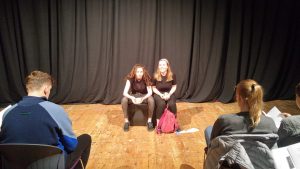 Angels in America. She, along with Catherine Wright, performed a scene in which Joe and Louis, in the wake of their own guilt, speculate on the deeply self-centered nature of American ideology – the ‘children of Reagan,’ both literal and metaphorical, owing nothing to neither justice nor love. She brought to Joe a sense of erratic confusion and misplacement that was well-suited to the delivery of this scene; in particular, she held the audience captive in her delivery of Joe’s speech in which he longs to ‘walk away unencumbered’ from all that keeps him accountable to justice. She utilised facial expressions to their full-effect – with her eyes wide and mouth gaping, she made for a perfect portrayal of a man caught in a whirlwind of confusion and conflicting ideology. Overall, she gave a very strong performance of a complex and often difficult character.

A nod should also go to Aliya Gilmore and Will Bloor as Hamlet and Ophelia respectively, in the ‘Get thee to a nunnery’ scene of Hamlet, and Kimran Rana and Saroja Lily Ratnavel as Bent’s Rudy and Max. Both performances required strong chemistry from the actors, and all in both cases, each pair was able to deliver this chemistry brilliantly, making for scenes that felt authentic to their source material and energetic with the emotion that they delivered.

It would be impossible not to touch on the brothel scene from The History Boys which closed the show, performed by the entire cast. The scene, written almost entirely in French, was absolutely hysterical, from Hector insistently correcting the Headmaster’s pronunciation to Posner as the prostitute Simone seducing Dakin on the desk, with his peers crying out ‘le papa!’ and, hilariously, ‘le sexy!’. The chemistry between the cast was tangible throughout, with nobody appearing as a weak link; the audience was fully engaged and the energy maintained even as the show came to a close, making this scene an ideal end to what was a night of consistently entertaining performances.

Overall, this Miscast was a success, managing to be at once funny and poignant, entertaining and engaging, and a skilful tribute to Miscast performances everywhere.