Aadira Parakkat delights in the feisty humour of Your Aunt Fanny’s ‘Minge Unhinged’ at the opening night of The Spare Room.

Minge Unhinged is exactly what it promises to be: a joyful encounter with your wildest, oldest, filthiest female friend. The selection of clever sketches put up by Your Aunt Fanny is witty, inappropriate and thunderously funny. The jokes are cautiously curated to produce bouts of laughter that build upon one another to leave you gasping for breath between each sketch, and each performer carries their own weight with unparalleled comic timing throughout. Held at the humble venue of the Pemberton Rooms as a sparkling addition to The Spare Room, a part of Durham’s Summer in the City Festival, the show left me with a warm afterglow.

The show is unapologetically female, much like the fluorescent pink lighting that illuminates the venue as the show commences; if there was any doubt that women can be funny, the murmured repetition of the show’s jokes by members of the audience exiting in fits of giggles certainly eliminated any such notion. Familiar characters of society, from angsty spoken word poets to posh self-congratulatory schoolboys, were depicted with unabashed loudness and physical comedy that blocked every corner of the stage; these women commanded their platform entirely with their unwavering voices and spirited gestures.

Each performer displayed versatility in their performances, switching between accents and personalities with seamless ease. The transitions between sketches and scenes functioned like a well-oiled machine, and as a rare instance in any staged production, I was unable to find a weak link amongst the members of the troupe. Even minor hiccups such as an uncooperative wig or slippery beret were covered up with a quip and immediately recovered from. It was clear that the 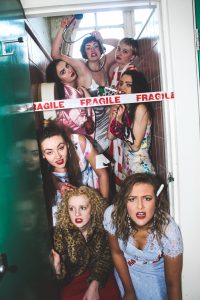 audience and the performers were on the same team: these women and their comical expressions and ridiculous jokes cut through any skepticism, eventually becoming a group of girls with whom you quietly yearn to form a friendship.

Furthermore, it was notable that each sketch was vastly different from the next; at one point, the show effectively transitioned from a sketch about the clown wig-wearing children TV show presenters, Boin and Zoin, and their awkward and unenthusiastic friend Shloin, to a sketch placing the Brontë siblings as present-day personalities. The audience was introduced to a retiring man and his “intrusive cow” of a neighbor hurtling insults at each other beneath plastic smiles, and we also later eavesdropped on a conversation between two pigeons about the Earth’s flatness.

In the span of an hour that passed all-too-quickly, the audience was placed in absurd situations, hearing conversations we weren’t meant to hear, like a first-time smear patient and her doctor’s unravelling of her family tree based upon her familiar “Lockhart Labia”. However, despite intruding on these various vibrant caricatures, You Aunt Fanny create an atmosphere where you feel like you’re simply laughing an inside joke with your dearest friend, adding a nourishing warmth and sensitivity to a comedic set that if done differently, could have been uncomfortably vulgar and unsettling.

Ultimately, Minge Unhinged boasts of a palpable camaraderie between its performers, a camaraderie that extends to audience and envelops it in a reassuring embrace. If given an opportunity to attend any of Your Aunt Fanny’s shows in Washington or Newcastle this summer, I’d highly recommend you to let yourself experience an hour of forgotten inhibition and pure hilarity. This group of girls will pull your leg and then pat you on the back, just like any trusty friendship group would; and as you walk out of the venue, you’ll probably find your gait more confident and your spirit more empowered than when you entered those four walls illuminated with fluorescent pink.

Image taken from the Your Aunt Fanny Facebook page.