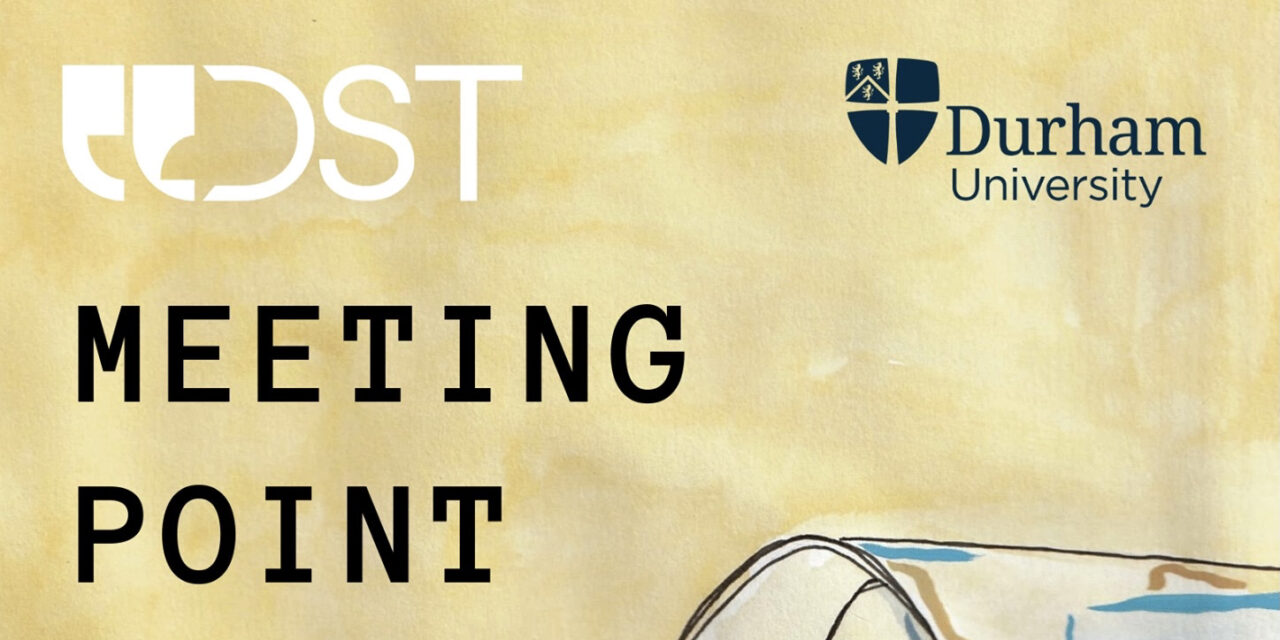 ‘Time was away and somewhere else.’ This quote, taken from MacNeice’s poem ‘Meeting Point’, captures the essence of this play. Meeting Point is so all-encompassing that it does seem to pause time to present the reality of a complex relationship. From the moment the lights go up for 12 South Theatre Company’s production of Meeting Point, it is evident that Imogen Usherwood’s writing will succeed in translating some of the beautiful imagery of MacNeice’s poem while enhancing it in a modern manner.

The talented team of co-directors, Hugo Millard and Imogen Usherwood, and producer Sol Noya create a performance that marries something as simple as eating a piece of cake with the treatment of profound inner emotions. Meeting Point is a play about love, loss, the navigation of the modern world, and the meaning of cake. Warning: your feelings about lemon drizzle will undoubtedly be influenced during the process of watching this memorable production.

The simple set design prevents distraction from engagement with the actors’ emotions and allows for feeling to adopt the central position within the play. Even the smallest actions, such as an electric moment of eye contact between the two leading actors, are charged with intensity. Anna Bodrenkova’s decisions as technical director fantastically complement the structure and progression of the play. The lighting and sound effects are minimal, yet the effective employment of simple blackouts powerfully punctuates the concise scenes.

While there is little physical movement or action in the scenes, the play’s momentum is generated by the compelling character profiles and the talented actors occupying them. The grief-stricken Sadie (Hatty Tagart) perfectly balances moments of her character’s deeply rooted pain with instances of undeniable humour. Her ability to switch her character’s mood from irritable to endearing allows her to bring the painful reality of a grieving individual to the stage. The result is a standout performance of a relatable character that one can’t help but love, despite her concealed struggles.

Tom Cain plays the adorable poetry fanatic Matt, and, as the play progresses, his talents for conveying the suppression of inner turmoil are revealed. Occasionally the pace of Cain’s lines becomes a little frantic; perhaps a few more pauses between his shifts to direct audience address would allow space for his convincing characterisation to shine through even further. Nevertheless, the subtlety and variation of his facial expressions are notable, giving a moving insight into a mind facing a difficult internal barrier.

The ensemble members Archie Collins and Catherine Turner also deserve distinctive acclaim for their slick and well-rehearsed performances. It is a skill to perform the flat voice of a Tinder app or the unsympathetic character of the Google search engine with such seamless comic timing and robotic tone. They certainly convey the unsettling disconnection between real people and the digital world.

The awkward atmosphere of the first Tinder date scene is almost tangible, and the decision to continuously fissure the fourth wall between actors and audience allows the spectators to feel direct experience of this uncomfortable yet magnetic interaction. The single table positioned centre stage acts as a physical connector between the two characters, also drawn together by their shared desire to hide their internal conflicts. We watch the energy created at this meeting point as intimately as if we are the other customers in the coffee house. As MacNeice says, these are ‘two people with one pulse’, and thanks to the perfect marriage of staging and writing, the power of their connection extends into the audience. As the relationship between the two characters grows and the play unfolds, you will find yourself questioning whether they will ever be able to find an emotional meeting point where their troubles can be alleviated.

Overall, if you want to lose yourself in a seamless production that is full of both heartrending complications and moments of humour, then I would direct you straight towards Usherwood’s Meeting Point.

Meeting Point was performed at the Assembly Rooms Theatre at 7pm and 9pm on 6th June 2021.