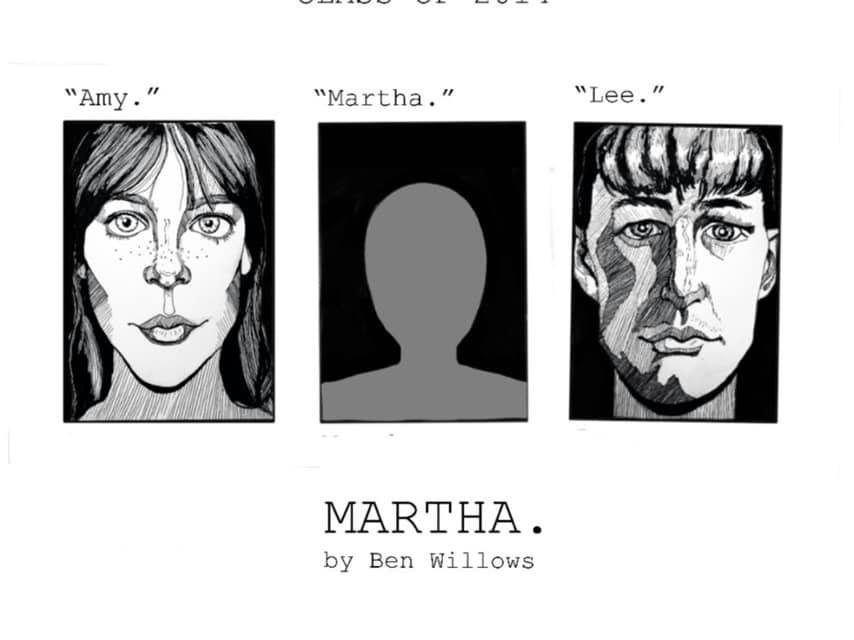 Florence Lunnon praises the naturalism, bold performances and powerful student-writing of 1TC’s ‘MARTHA.’, a play performed and set over Zoom.

Connection has potentially been the most challenging thing to achieve over the past year: connection to the internet, connection to our studies and our jobs, and connection to each other. Zoom is distanced, awkward, and I often thought it an impossible space for creativity – until this production proved me wrong. Ben Willows has accomplished a remarkable feat in ‘MARTHA.’, using the limitations of a digital platform like Zoom entirely to his advantage.

Amy (Isabella Thompson) and Lee (Harrison Newsham) are old school friends who sit down after six years apart and reminisce together. Martha becomes the obvious elephant in the room in their conversation and catalyses these emotional outbursts from both Amy and Lee. Both Thompson and Newsham do a fantastic job of keeping these outbursts naturalistic and contained, and Willow’s writing allows the characters’ trauma to flourish in the awkward emotional confines of digital space. This production’s overall setting emphasises Amy and Lee’s emotional detachment from one another through their physical separation.

If this were a conversation to happen in real life, an argument would surely occur. However, the confrontation appearing on Zoom means that the characters do not have the accessibility to argue; they do not have the connection. As a result, they are forced to sit and listen to each other, to share their own different and separate sides of the story. Willows cleverly swaps the characters’ perspectives, producing these incredibly sensitive and deeply emotional confessions that constantly cause the audience to swap from one character’s side to the other.

Thompson is a bold presence on screen. She creates this wonderfully self-assured, positive and confident character, beautifully contrasted by Newsham’s rather shy, sensitive and emotionally frustrated portrayal of Lee. Thompson mainly precipitates the changes in conversation and helps to vary the tone of the play. However, there are moments when too much time is left between the new topics, which stints the play’s natural flow. That said, both Thompson and Newsham’s overall pacing moving off these pauses must be commended. Timing on Zoom, as the majority of us know, is immensely difficult, and both actors do an impeccable job of fluctuating their delivery to keep the show an enthralling watch.

Credit must also go to Honor Douglas and Ben Johanson. To direct a digital show is no small achievement, and what is lost in staging on this platform is made up by the attention to detail in the actors’ voice and facial expression. Occasionally, there were lighter moments of nostalgia that could have been emphasised to differentiate interactions further, particularly towards the start of the show. Overall, however, Martha is natural, delicate and utterly believable.

Whilst many moments of the show stood out to me, the part that will stay with me the most came from the nostalgic middle-ground the characters finally managed to achieve together before the Zoom call finished. Willow’s writing and Newsham’s talent allowed Lee to grow in confidence through his accusations, becoming more self-assured. In contrasting parallel, Thompson enables Amy to effectively regress from her bold persona, and her beautiful vulnerability eventually allows the characters to see eye-to-eye. It feels as though both have achieved some longed for closure as they sing together. Keeping the song from being a cliché is a credit to both actors’ overall performance. Moreover, the choice to include it in the ending credits helps to tie the whole show together in this slickly edited and professional-looking production.