Josie Williams takes a break from summatives with an evening of Shakespeare.

Macbeth is a play for which I set an extremely high bar—it’s one of my all time favourite plays but I have both loved and hated it in different productions. This one definitely falls into the former category, with incredibly strong direction from first time directors, and a cast without a weak link, including a Macbeth I would happily have paid professional prices to see. 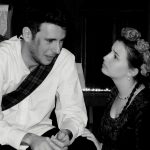 The choice of the Tunstall Chapel as a venue was a brave one, which I would say worked well overall, although it certainly came with its problems. The visuals were not ideal, given that the leaning forward of one audience member was enough to block the rest of the entire row’s view, but when everyone was sat back in their seats it was fine. The other main difficulty was having the audience on either side of the stage, but this was dealt with well and, for the most part, lines were not lost thanks to intelligent blocking and clear diction from the actors. The floorboards were also rather creaky, resulting in some distracting background noise from backstage, which was slightly irritating, especially when characters were soliloquising. That said, the intimate setting allowed for high level of naturalism in which the strong ensemble cast shone. However, it did make any missing small details more obvious, such as the lack of blood on Macbeth and Lady Macbeth’s hands, which for me is something discussed too much to be missing.

The aesthetics of the entire production were fantastic, and really helped to place the action without the need for a set. From being greeted by Macbeth himself as we walked into Castle, to Macduff and Ross holding tartan banners, to the tartan detailing on the programmes, the attention to detail set the scene before the play had even started. Costumes, hair and makeup added to this through their simple but effective application, and there were some beautiful hairstyles, with plaits reminiscent of Game of Thrones. Sound effects were also used well to set the scene of the heath, where the witches appeared out of the audience to begin the play. I particularly liked the acting and directorial decisions behind the witches’ scenes, showing clever use of space and line delivery to give them an ethereal quality not often seen in these characters.

The acting was fantastic throughout. Special mentions really ought to go to each individual cast member, as this was an extremely talented ensemble, but Nick Denton as Macbeth was nothing short of brilliant. Completely at home in the language, he was captivating throughout, both in his quiet, reflective soliloquies and angry outbursts. His gradual descent into cruelty and madness was perfectly played, making it unclear at which point we ceased to pity him. Lady Macbeth, played by Kesia Schofield, was also fantastic. The dynamic shared between Macbeth and Lady Macbeth was extremely well played, with her dominance powerfully exhibited in earlier moments (such as Macbeth kneeling in front of her), as well as in the evolution of their relationship over the course of the play, with Macbeth becoming more dominant and physically intimidating as his character grew increasingly darker.

Overall, despite some minor flaws, this is a production that I would highly recommend. If nothing else, go and see it so that when Nick Denton inevitably shoots to fame as an actor, you can claim to have seen him in a show at university…

The views expressed in the reviews and comments on this page are those of the reviewer, and are not representative of the views of DST or Durham University.