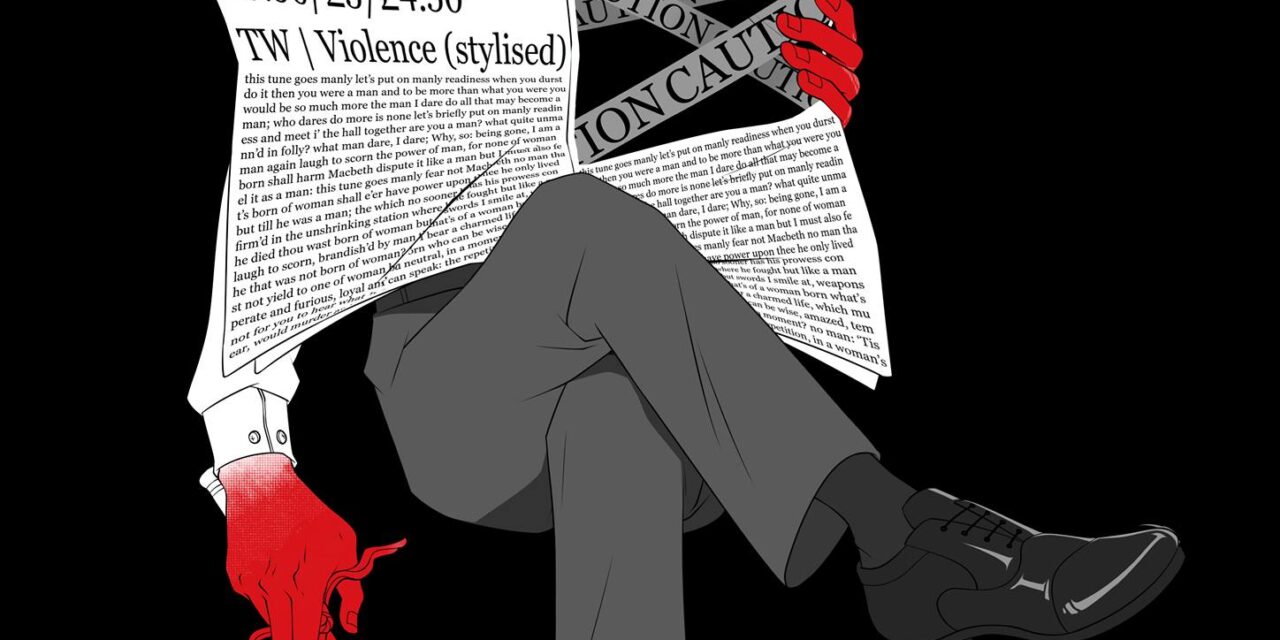 Saniya Saraf delights in the originality, modern personas and masterful tech of DUCT’s production of Macbeth.

Director Esalan Gates engineers a trailblazing adaptation of DUCT’s Macbeth. It is a production conditioned by the pandemic and adjusted numerously yet finishing better than most pre-COVID theatre. The marvel in this adaptation lies under the wing of its production team. It retains what is very infrequent in adaptations of Shakespeare – novelty. This is true not just in its unconventional gendered casting and the newly characterised witches but also in the newspaper-aligned set design and magnificently fluctuating camera work. The adaptation breeds originality, and it is refreshing to see a production that is so neat in its creative vision.

The show’s original composition by Angelika Shortanova is arguably one of its most dominant assists, working alluringly to create dramatic tension. The authenticity of Gates’s show is foregrounded by ensuring sound that is not only original but also empathic to the tragedy and poetry of Macbeth. The music is haunting and tense, and enough cannot be said about the lengths at which it completes the production. It is used often and it is used well, aligning perfectly with moments of climax and catharsis.

There is intelligent symbolism in the set design; the stage is covered in newspaper meant to show the development of modern journalism, looking striking and arresting. In contrast, the costumes are dull and the actors look haggard compared to the engaging set – this is perhaps intentional but works against the adaptation. It would have been more interesting to use garments to develop character for the female-led cast – like in the case of the male witches.

The witches are the highlight of this adaptation. Gates did not go wrong in creating their modern personas. The first is an addicted journalist, the other a gentlemanly businessman and the third a Gen-Z skater boy. They reflect a generational flow, highly metaphorical and interestingly casted. Ben Willows is captivating in his portrayal of the first witch, mastering the twitch of an addict and the vigour of his character. Tom Pyle plays his characters tactfully and skilfully. Ollie Stockley is almost comic in his portrayal of the third witch, inarguably charming in his performance. The three are perfectly in sync, the chorus well-rehearsed and engagingly performed. They are rhythmic, and the iambic pentameter is done justice in their performances.

The female cast is a powerful one; Adela Hernandez-Derbyshire shines in her characters, particularly the Porter. She manages to skilfully walk the line between comic relief and metaphorical speech, firm and rarely flailing even slightly out of character. The same can be said about Eleanor Kris in her performances of Ross, Fleance and Seyton. Marie McGovern shines as Lady Macbeth, slipping into her character with ease. Both Storey and Gates are authentic and firm in their portrayals of Banquo and Macduff, unwavering in their affinity for performance. Kate Pesenti, Alice Butler and Jessica Price perform engagingly, making the show a well-rehearsed and enjoyable one.

Unfortunately, I was not convinced by the portrayal of Macbeth themself, which felt incongruous with the rest. While Nancy Meakin performs well, there is some sense of monotomy around the character. Given that Macbeth is one of the most complex characters in the canon, there is much left to be explored and depicted, which was not exhaustively. The fluidity of Macbeth, along with the force of his transformation, is not felt. This is a character that rounds better and bigger than most of Shakespeare’s creations; the dichotomy is essential and should have been greater directed into the acting. I did not experience Macbeth’s guilt conscience, neither did I feel the tragedy of this protagonist.

The trauma and torment of Macbeth are integral, yet are not elements worked effectively enough into this adaptation – seemingly, because of a deficit of directional character work. There were frequent moments where the monologues dragged, the speech sounded flat, and I was left unsatisfied by the lack of dramatic performance. This is perhaps what makes the show sometimes seem ‘pretty’ but detached: there is a disconnection in audience interaction with the emotion on stage. Nevertheless, Macbeth is a daunting character to play, and Meakin is consistent, delivering her dialogue skillfully and organically. She must also be commended for stepping into the role after a drop-out at the start of exam season. There is unarguably an originality with which she played Macbeth and, altogether, it is a minimalistic yet competent portrayal.

It is vital to give a special mention to the tech team. It is the creativity in the filming that makes the show what it is. To elucidate would be to rob the reader of experiencing the magic of editing and camera work that the show has to offer. Neatly executed, the filming is perhaps the best Durham has seen in the past year.

Overall, after a year-long wait, DUCT’s Macbeth does not disappoint but, instead, surprises you with its eccentricity and exclusivity. Nuanced, professional and seasoned, this is a show you do not want to miss.