The Durham University Classical Theatre’s production of the Greek comedy Lysistrata offered its own spin to Aristophanes’ complex satire that challenged the classical ideas of sexual and political power of its time. The anti-war and anti-sexist notions of the play are difficult to ignore, however, while DUCT’s production seemed to have more or less adhered to the script entirely (apart from sprinkling in a few expletives here and there), their impact was much less effective than one would expect from a classical production.

Upon entering Alington House, the venue where the play was held, it was immediately clear that the play would be minimalistic in its approach when it came to set and costumes; the backdrop was a collage of cardboard signs with various clever sayings on them, and the grunting Lysistrata sitting on stage to greet the incoming audience seemed to be wearing the clothing of the average 21st century citizen. However, while this made a weak initial impact, minimalism in no way has to 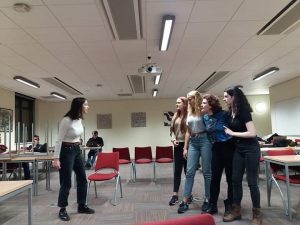 equate to mediocrity. Fortunately, I was pleasantly surprised when the play began and Iz McGrady’s commanding voice captured the audience’s attention; her frustration as Lysistrata was believable and well-delivered.

The dialogue was impressive, and tweaks made to the original classical script were well received by the audience. The use of accents was effective, especially with the Spartan man and woman; Niamh Hans’ performance as Lampito, the Spartan wife, was memorable. The abundance of innuendos scattered in the production were a delight. The second half of the play held some of its more memorable moments, most notably Jacob Freda’s performance as Cinesias. I specifically enjoyed the execution of the scene with the wife enticing her husband into bed and then running off, however, the chemistry between the two characters could have been more palpable.

However, it is difficult to ignore the underwhelming impact of the play as a whole. The director’s use of space was unorganised and chaotic; this was especially noticeable in the fighting scene between the men and women. The limitations that were posed courtesy of the venue meant that scene transitions were awkward at times. Most of the time, the actors failed to keep the audience engaged; if only the lacklustre props and unimaginative costumes could be compensated for with much more powerful and consistent performances combined with more effective direction, DUCT’s production would have fulfilled its potential. DUCT’s production chooses to end the play with a dance party, which was an especially confusing choice, and it made the play seem rushed and unprofessional.

Therefore, while this production of Lysistrata was so rich in potential, the audience couldn’t help but be constantly reminded of its shortcomings due to its inconsistent pace and primitive set-up. While there were definitely moments of genius, DUCT seems to falter in executing that genius completely this time. A play with so much to say on the violent and sex-driven world we live in could have had so much to deliver, but the wavering energy made it difficult for the actors on stage to form a true relationship with their audience. However, it must be acknowledged that the play was successful with its comedy, and did not fail to fulfill the expectations of its genre. Overall, DUCT’s production of Lysistrata was a brave attempt at navigating the complexities of Aristophanes’ work. There was no doubt that this production was a product of hard-work and effort; its kinks can be easily smoothened as the actors become accustomed to performance over the next few days. I wish the team at DUCT the best of luck.

Lysistrata will be playing at Alington House on Saturday 24th November at 2:00pm and 7:30pm.