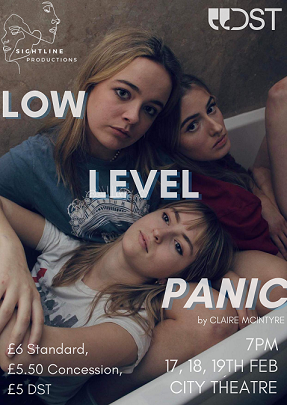 “Low Level Panic is a demonstration of student theatre professionalism”

Under the direction of Honour Douglas and Zara Ewen (assisted by Molly Knox and Katie Proctor), Low Level Panic is a high-flying success.

The stage is lit: an airer covered with towels, a sink packed with cosmetics, a clothes rail lined with hangers, and a toilet sat centre stage. The music is playing: a mixtape of familiar 80s hits is on. It occurs to me (just for a second) that I might be late. The actors are on: pottering around onstage – in the chair, on the floor, by the sink.

But then I realise that I’m not late; and that this is, in fact, a really brilliant way to open a play that is so preoccupied with female self-image under the male gaze (even if most of us here on opening night are also women). I feel like an almost unwelcome presence – as if I’m not supposed to be here and see them be so… normal. It doesn’t feel like they’re really performing. It feels strangely intimate to watch them while away the time like this until the show really starts.

And when the show really starts, when it’s really being performed, it’s also clear that all those involved in the production, from the directors to the technical team to the cast, are well attuned to the various nuances of Clare McIntyre’s script – which is no mean feat. Bold creative choices meet the boldness of its script.

Low Level Panic is a difficult play in many respects. Set in a bathroom shared by three twenty-something-year-old women, it handles dark and serious themes: poor body image and sexual assault and anxiety in a male-dominated society. But it does so with a commendable sensitivity that takes you in safe hands to these extremes. There are also lighter moments to be found in the play – in its funny lines and misunderstandings, in its remarkably faithful portrayal of female friendship. The play is a balancing act of light and shade.

The technical aspects of the production complemented its actors and answered the various needs of its scenes well. The lighting design was simple, suitable and cleanly executed (you’d never know that Amren Stephenson had stepped in only a few days ago). The sound cues, controlled by Molly Knox, were similarly reliable and effective. It was a slick and understated technical performance.

As for its three-person cast, their performances were similarly skilful. Lara Mulgrew was vibrant as Jo, with a remarkable stage presence: animated, brazen and compelling. I thought the decision to sit down – almost eye level with the audience, legs dangling off the edge of the stage – during one of the more aggressively forthright monologues she delivered was an especially strong one. I felt her frustration so keenly then – so much so that I even found myself wishing that she’d become more confrontational with us, perhaps even make eye contact. Lucy Faber played Mary with affecting and unflinching vulnerability. Her easy chemistry with Mulgrew made the friendship between their two characters all the more believable and easier for us to invest in. And although Celia is written as the most distant of them all, Georgie Durie held her own, easily entertaining as she breezed in and out of scenes. Her meltdown over the mess and monopolisation of their shared bathroom was a particular comedic highlight of the show.

Low Level Panic is a demonstration of student theatre professionalism. It somehow manages to be both raw and polished, ambitious and intimate, crude and gentle – all at once.  Set in the 1980s and first performed in the 1990s, it is striking how pertinent the play remains today. Maybe we’ll see it again in another thirty years. But I do think it’s worth seeing now if you can.